The Memoirs of Lord Thorval 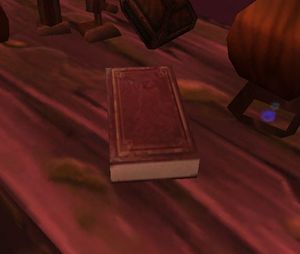 The Memoirs of Lord Thorval is a book found in the Scarlet Enclave, written by the death knight of the same name.

The Memoirs of Lord Thorval

It has reached my attention that some new death knights may be troubled by memories of their former lives. I entreat these restless minds to brood no longer, as no one can be filled with more loathing of his previous errors than I. Yet in the Scourge I have found absolution.

In my ignorance, I was once a paladin pledged to the hateful Light. Blinded with lies about hope, I left my wife and two young daughters at home whilst I scouted for Scourge presence in our area. Our petty band searched the woods for weeks, but every trail went cold. Winter set in and still we had learned nothing about the enemy. Frustrated, we turned homeward.

Ascending the final hill revealed a terrifying vista. The village lay burnt and deformed. I ran to our house. A makeshift bolt had been nailed across the outside of the door. Too distressed to wonder at this, I burst in to find the remains of my family prostrate at my feet, charred beyond recognition. I turned away in anguish, and beheld the gashes in the door where they had clawed in panic. The smallest scratches had belonged to the youngest.

I later learned that in our absence, rumors had flown that a plaguebearer was hiding around the village. The Scarlet Crusade had seen to it that every last inhabitant was rounded up and burned alive. Unthinkable though their cruelty was, I found that the same feeling now stirred inside my breast. I yearned to hunt down the Crusaders, to make them suffer the rage of my blade.

Eventually, I was made to reassemble with the rest of my party. I sensed my own despondence and fury in some of the others, but the leaders ordered us to continue to the nearest remaining waypost. Not long after nightfall, we heard the ominous cackling of the undead echoing from the trees, and a wave of Scourge overtook us.

Mechanically, I slew them. But for each of the fallen, two more crawled forth from the hills. We were caught in the same tide of Scourge we had been hunting, only now we were broken and unprepared. My allies were succumbing to wounds and exhaustion. There were too many Scourge to resist now.

As the blows came, I remembered playing in these woods with my daughters. It filled me with hatred. Why must such memories exist? They were an illusion, serving only to distract me from the reality of pain and dissolution. My daughters were dead and the field overrun with Scourge. Death is the only real end to any mortal tale. Wielding power to protect leads inalterably to failure. Success meets only those who use it for a different end...

Then and there, I swore allegiance to the Lich King, the herald of victory in our age. He purged me of the hateful human sensations that had tormented me. I was reborn as a death knight. There is no force to which my brethren and I will fall. There are no defeats bitter enough to test my icy resolve. Cleansed by the Scourge, I stand ready to satiate my lust for death throughout the length and breadth of Azeroth.