The Monkey King is a hozen who was a companion of Shaohao, the last emperor of Pandaria.

Rise to power and Fu Zan

Long ago, only a few years before the War of the Ancients, the Monkey King had become the leader of an ungovernable people. He had risen to power without spilling a single drop of blood and was beloved by every hozen tribe, despite that hozen fought endlessly, constantly, for the simplest reasons. Any disagreement meant physical violence, but the Monkey King knew this. So he told the hozen tribes, "I am the Monkey King. Your tribe supports me with all its heart." When a single hozen would question him, he would tell them that their tribe's leader had already agreed to it. No hozen wanted to challenge their leader on a whim--and be in a fight--so they declared, "You are the Monkey King."

When the tribe leaders learned his name, all of their subjects were already calling him the Monkey King. They were confused, but they did not want to fight their people, so they did not challenge him either. The Monkey King's wild claim, his lie, eventually became true because nobody dared to disagree with it. Soon tribal fighting had ceased. The Monkey King passed judgment on all disputes and the hozen obeyed. The Jade Serpent Yu'lon could see the Monkey King's motivation. It was simple: he disliked the sight of blood. At the most fundamental level, this was a creature who loathed battle and loved peace. And from that, he had achieved what no other hozen ever had.

Yu'lon needed to know how deep the Monkey King's cleverness ran, so she visited him in disguise. All the Monkey King saw was another hozen, but this one did not call him king or bow before him. He demanded that she show respect. Instead, the newcomer asked him a riddle, telling him that a true king would have no trouble answering it. He snapped out the correct answer in seconds. She gave him another. He answered again. On and on they went, for three days and three nights. The Monkey King grew enraged, but even in his anger, he continued to answer her questions. Yu'lon was convinced. Violence and tyranny were not in the Monkey King's nature, or he would have tried to shut her up with force long ago. She revealed her true form-which caused considerable chaos in that hozen village-and presented him with Fu Zan, the Wanderer's Companion. The Jade Serpent told him the story of Freya and how the staff had come to be. Then she warned him: she sensed that, one day, his cleverness would not be enough to stop evil. When that day came, he would need to act decisively. The Monkey King did not believe her. But he did think the staff was very, very pretty.

With Fu Zan in his grasp, the Monkey King's authority over the hozen became absolute. He could bend like a willow in the wind, avoiding any blow from a challenger to the throne. The staff was as light as a feather, and yet anyone who tried to steal it found they could not lift it an inch. It was his; no one else was allowed to wield it. But there was a serious problem with Fu Zan. To look regal while carrying it, the Monkey King needed to use two hands. That meant he had no free hand for his most prized possession, a small keg that he always kept filled with brew. But that was easy to solve. The Monkey King has two metal bands added to the end of Fu Zan and hung his keg from them. Luckily, the staff was not permanently damaged.[1]

The Monkey King and Prince Shaohao became friends. When Shaohao was crowned emperor, he embarked on a quest to save Pandaria from the impending Great Sundering and consulted his companion, the Monkey King, on how to divest himself of his burdens, to purify his spirit, and to become one with the land. The Monkey King believed that Yu'lon's prophecy had come to pass: this was the day he needed to face evil directly. He declared that he would stay by Shaohao's side until the end.[1]

Weary of waiting, while Shaohao meditated for days, the Monkey King whittled a strange grimacing visage out of bamboo, he urged the Emperor to place the mask of doubt on his face. While mischief was the Monkey King's motivation, the mask worked, as Shaohao pulled the mask away, his doubts took on a physical form. The two companions then traveled to each temple of the August Celestials, purging the Emperor with the help of the Monkey King's masks.[2][3][4][5][6] After Emperor Shaohao gave his life to save Pandaria from the Sundering, the Monkey King went home and hurled Fu Zan into a river in a fit of rage. His friend had vanished, and the Monkey King had seemingly failed Yu'lon's prophecy. Eventually, he went to the river to retrieve the staff, but only because those waters were sacred for a jinyu tribe, and they could not remove it themselves-it was too heavy. It still belonged to the Monkey King.[1]

Some believed that all the other lands had been destroyed. Other wanted to explore the world beyond the mists. And a few wanted to claim Pandaria for themselves. With force. Not much has been written of this brief surge of would-be tyrants. Very few of Pandaria's denizens were harmed by any of them. Whether they were mogu warlords, fringe hozen tribes, or even brutal yaungol raiders, none of them ever launched a true campaign of conquest. Before they could, they were always approached by a mysterious hozen who would chatter endlessly about a hidden cache of artifacts that had granted him untold power. He could demonstrate miracles-no weapon could touch him, no matter how many combatants tried to attack him. It was very convincing. These ambitious, greedy beings would eagerly follow the Monkey King's directions. Sometimes they would walk off a cliff. Sometimes they would find themselves ambushed by Shado-Pan. In any case, their story always came to quick end, and the Monkey King would stride away, Fu Zan resting easily across his shoulders.[1]

The Monkey King had never has such fun. Turning evil beings into stumbling fools became his most cherished pastime for years. He saw it as his way of honoring his old friend Shaohao, who now watched over the land but could no longer protect Pandaria's peoples directly. But just as Yu'lon had told him, his cleverness would one day not be enough to defeat evil. A mogu despot called the the Jade Warlord had followed the Monkey King's directions, traveling deep into a tomb beneath Kun-Lai Summit. But rather than finding nothing--as the hozen had expected--the Jade Warlord found an ancient cache of knowledge written by the Thunder King, Lei Shen. In that warlord's hands, it would grant him terrible, awful power.

The Monkey King knew he had made a mistake, and as the ground began to shake, he knew there was no time for anyone else to stop the mogu. He took Fu Zan and went into the tomb to deal with the problem directly.

The Monkey King loathed violence. He detested it. But he also knew he was the only one who could oppose the Jade Warlord before it was too late. The two of them dueled beneath Kun-Lai for hours. For years, Fu Zan had been an aid to the Monkey King's mischief-that proved to be excellent practice for avoiding the powerful, lethal magic the mogu soon unleashed. The Monkey King believed he would not leave the tomb alive that day. Indeed, he did not. But he was not killed. The Jade Warlord had no command of his new power, and an errant spell did what neither of them expected: it froze them both in jade. They remained there, locked in battle, for almost ten thousand years, able to communicate all the while.[1] 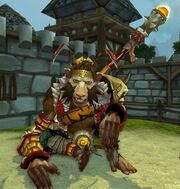 The Monkey King in WoW.

After hearing about the Horde's acquisition of the Divine Bell, Prince Anduin Wrynn began searching for a means to counter its power. His research has led him to an item known as the Harmonic Mallet. The Harmonic Mallet was last seen in the hands of the Monkey King. The tomb of the Monkey King is located in Tomb of Conquerors, where he and his mogu adversary are frozen in jade.[7] Anduin discovered an incantation to release him from the jade imprisonment but it would release the Jade Warlord as well. After the Alliance champion defeats the Jade Warlord, the Monkey King asks the champion to solve his three riddles in exchange for the whereabouts of the Harmonic Mallet: an instrument used by the Pandaren rebels in ancient times to counter the mogu's Divine Bell by turning its power into pure harmony. After solving his riddles, the Monkey King revealed that he had to to break the mallet and sent his minions to hide its pieces in the far away corners of Pandaria in order to prevent it from falling into mogu hands.

The Monkey King can later be seen on the Timeless Isle overseeing the battles in the Celestial Court. After some time had passed, the Monkey King sensed that his travels with Fu Zan were nearing their end. So, he traveled to the temple of Yu'lon and passed the staff back into her care so that one day it can again be given up to another who is worthy to wield it.[1] 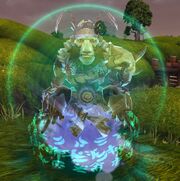 Taran Zhu and the Monkey King at the order hall.

The Monkey King assists Brewmaster monks in obtaining his staff,

[Fu Zan, the Wanderer's Companion], from the Temple of the Jade Serpent. He also helps defend Tian Monastery, and travels to the Wandering Isle and joins with the Order of the Broken Temple.

In Karazhan, he beats down Barnes and announces the play Wikket.

The Monkey King in Zuldazar.

The Monkey King can be found at the Hozen Throne tiki bar in Zuldazar, flanked by two winged hozen: Ginger-Ginger and Flap-Flap. When asked how they acquired wings, the Monkey King responds "There are many secrets both mysterious and divine, you have yours and I have mine."

Free! Free at last after ten thousand years! This is a happy day! Very happy happy day! Gonna need biggest party ever! With nibs! And dibs! And brews! And jungle hozen! And mountain hozen! And sky hozen!

In pieces three the malled be. Handle, head and ointment. You ring the bell without the mallet? You going to get an ear and face full of evil.

Poor Chief Ingoo Ingoo. His family forget what rod was for. He so mad.

If he keeps, he will corrupt his people. Very sad.

If seen, the guards and gods are likely to attack.

There are many secrets both mysterious and divine, you have yours and I have mine.