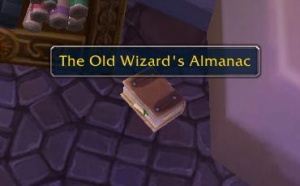 The Old Wizard's Almanac is a book in Dalaran which can spawn in place of The Schools of Arcane Magic.[56.7, 45.5]

The Old Wizard's Almanac: The Alliance

As a historically Alliance-friendly organization, one would think that the Kirin Tor might not need a guidebook outlining the Alliance races. I feel that the opposite is true - that we can only understand the other races after truly looking inward. -O.W.

Human - As adaptable a race as you will ever find, humans can be some of the most highly skilled magic-users. Any list of the most powerful mages in history will be dominated by humans. Perhaps most tellingly, the Old Wizard himself is a human.

Dwarf - Dwarves possess a moderate magical acuity, but tend to have difficulty at the higher echelons of wizardry. While they tend to focus more on priestly endeavors, a rare few have been known to dabble in arcane or necromantic activities.

Gnome - Gnomes are remarkably adept arcanists. Pound for pound, they are some of the most potent casters the world has ever known, and have always had a presence in the Kirin Tor.

Night Elf - While night elves tend to avoid arcane energy like it was the Scourge, their druidic powers are second to none.

Draenei - This ancient race has brought the alliance both powerful wizards and masterful wielders of the Light. More recently, the Draenei have adopted shamanism after their arrival in Kalimdor.

High Elf - The magic of the high elves is extremely powerful. High elves possess a magical acumen that rivals that of any - even the humans. Some of the greatest heroes in the Battle of Mount Hyjal were the High Elf Priests.

The Old Wizard's Almanac: The Horde

Orc - Despite their obvious physical strength, they display a decent magical ability. Orcs tend to make poor arcanists, but culturally have a heritage of peaceful shamanism, combined with a more recent focus on the darker magic of warlocks and necromancy.

Tauren - Few experiment with the arcane, but the bull-men are highly attuned to the magics of the earth. As is the case with many nature-worshiping tribes, many follow the path of the shaman. Furthermore, their most senior druid can rival the archdruids of Darnassus in power.

Troll - A surprising affinity for the magic arts belies the troll's barbaric reputation and history. My Zul'tour - an expedition into the troll empires of Zul'Aman, Zul'Farrak, and Zul'Drak - has revealed a startling variety in troll casters, ranging from witch doctors to shadow priests to a bizarre animal worship that most closely resembles druidism.

Undead - The undead have as much magical skill as can be expected of any living human... if not more. Sylvanas' Forsaken, in particular, fling spells with the frightening levels of zeal.

Blood Elf - A history of prolonged exposure to magical energy has left an indelible mark on the Blood Elves. These lithe, magic-addicted creatures seem to fare well in any magical school they study. Most recently, the blood elves have take up the path of the "Blood Knight", which can be loosely described as a form of paladinism.

Taunka - Much like their tauren cousins, taunka tend to focus on magic stemming from the earth.

Magic is not limited simply to the races of the Horde and the Alliance. Many of the creatures that make Azeroth their home are capable of thaumaturgical pursuits. - O.W.

Naga - While males are more suited for melee combat, female naga are incredible sorcerers, commanding the power of water and ice at their fingertips. It should be noted that their ancient queen Azshara was reputedly one of the most powerful magic-users in Azeroth's history.

Nerubian - Only the most powerful Nerubian leaders have the capacity for magic. However, following the onslaught of the Scourge, many plagued Nerubians have become necromancers.

Ogre - Most of these expatriates from Draenor focus on the path of the warrior or the ranger, but a small percentage choose a life of sorcery as ogre-magi. Cho'gall, one of the first ogre-magi, was an immensely powerful sorcerer (in addition to simply being immense).

Satyr - These dangerous creatures have features similar to those of night elves, but twisted demonic bodies. Masters of demonic magic, satyrs are incredibly dangerous. Extreme caution is advised when approaching them.

Blue Dragons - The ancient children of Malygos are among the foremost experts on arcane magic. Some, such as the adventurous Kalecgos, are friendly to the mortal wizard and potentially could make excellent research partners. Unfortunately, recent rumors from the north indicate that some of the blue dragons have grown extremely hostile to other spellcasters. The reasons for this aggression are as-yet unknown.

My travels have introduced me to numerous societies across Azeroth, many of whom practice shamanism. Many of these peoples live off the land, shunning advanced society for a more nature-centric existence. - O.W.

Quilboar - The few quilboar that remain in Kalimdor are known to practice geomancy, a crude form of shamanism. Some plagued quilboar practice this form of magic even in undeath.

Gnoll - Gnolls are a strange race. I once managed to gain the favor of a clan leader in Redridge by performing a basic cantrip - the kind taught to Dalaran's schoolchildren. For a day, he was my best friend, until he forgot my trick and sicced his hunters on me. Anyhow, when they can be bothered to pay attention long enough, gnolls tend to focus on elemental shamanism.

Centaur - Centaur females tend to use a dark, perverted form of shamanism. Magic use among centaur males, on the other hand, is quite rare.

Wolvar - This wolverine-like group may appear primitive upon first glance. However, their tribal leaders are often very powerful shaman.

Oracles - Though they are the sworn enemies of the wolvar, the oracles seem to have a nearly identical social system. Grunt work is done by the warriors, but their cultural leaders are nearly always great shamanic practitioners.

The Old Wizard's Almanac: Peoples of the Land

Shamanism isn't the only nature-centric magic. Many of Azeroth's simpler races perform spells that stem from the the[sic] earth's energies, but which cannot be called shamanism. Whether their magic powers come from the same source as the shaman's magic or not is a constant point of debate in the halls of the Violet Citadel. - O.W.

Tuskarr - The walrus-men practice a form of magic that, on its surface, is astonishingly similar to shamanism. Our scholars have not yet deciphered the source of the tuskarr's magic.

Kobold - These simple creatures are only capable of earth magic. My exploits as a youth taught me that a few of them have perfected a rather nasty fireball, but that's about it.

Wildkin - These feathered creatures go by many names - moonkin, owlbear, and owlkin, to name a few. These gentle giants possess a natural, druidic energy similar to that of the night elves.

Harpy - The cackling bird-women are capable of powerful elemental storm magic. Little is known about the source of their power, as 1) they attack invaders on sight, 2) few can discern any meaning behind their shrill cries, and 3) none can tolerate the smell of their nests.

Murloc - For many years these enigmatic creatures appeared to be capable of only the most basic magic. Do not be deceived by their unintelligent fae[sic]. The fish-men are fully capable of casting potent earth and water spells, and their numbers on land increase by the day.

Makrura - The lobster-like race of makrura, while widely considered primitive, has an innate capacity for water magic.

Magic is not for everyone. The non-intelligent beasts of the world have survived for millenia[sic] on their wits alone, as have several of the simpler races. Some races, while socially advanced, simply prefer to avoid magic in favor of other pursuits. As Kirin Tor, it is critically important that we understand the way that these races thrive without any magic at all. - O.W.

Goblin - Goblins tend to be distrustful of magic, preferring to focus mainly on technological ventures. Unlike their gnomish counterparts, they lack the capacity to understand and appreciate the arcane. That being said, there are some that have combined their technology with magic, yielding interesting results.

Magnataur - The enormous magnataur have little to no magical affinity. Magnataur casters are very rare, and tend to be follow[sic] a shamanic route if they practice at all. I can tell you first hand, however, that they won't go down without a fight, and their thick hides can withstand several of the most powerful frostbolts.

Vrykul - While Northrend's half-giants naturally know little to no magic, some have been trained in necromancy by the Lich King. I have also heard rumors of rune magic of some kind, but I have not yet had the opportunity to research this intriguing subject in depth.