From Wowpedia
(Redirected from The Opening of the Dark Portal)
Jump to: navigation, search

For the event prior to the release of Burning Crusade, see Dark Portal Opens.

In this wing of the Caverns of Time, a group of players must defend the last Guardian Medivh, in a swamp known as The Black Morass. The Guardian Medivh, possessed by Sargeras, attempts to open the Dark Portal to Draenor, while wave upon wave of dragonkin of the infinite dragonflight attempt to defeat Medivh in order to alter time and halt the invasion of Azeroth from Draenor. This time sequence is set about a few months before Warcraft I events (circa 30 years before WoW). It takes about 30 minutes to fully clear the instance, starting from triggering Medivh until the last boss is dead.

But now the ancient Dragon Aspect has been roused by an elusive threat: dark, sinister agents have infiltrated the timeways, embarking on missions to alter the course of the past, present and future. As a result, the bronze dragonflight has begun enlisting heroes to prevent the sabotage of key historical events. The balance of time is in jeopardy, and if the past is not saved... there will be no future.[1]

Deep within the Caverns of Time, the brooding dragon Nozdormu has awakened. Since the world was young, the bronze dragonflight has safeguarded the winding labyrinth, monitoring the shifting timeways to ensure that the delicate balance of time is upheld. 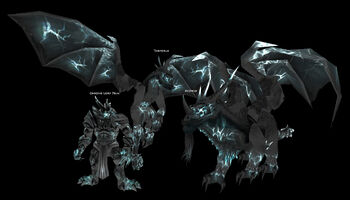 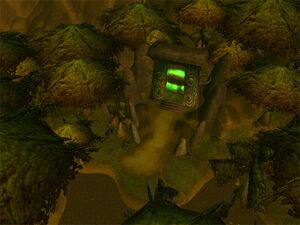 The Opening the Dark Portal begins with the five players entering the portal in the Caverns of Time. Once inside, it is recommended that the players all pick up a

[Chrono-Beacon] from Sa'at before leaving the cave. The instance setting is a swamp which is filled with non-elite beast mobs that must be cleared. Once any player enters the area approximately 10 meters from Medivh, the event will occur. If Medivh dies, the encounter will reset itself in 5 minutes and players will be able to pick up a new Chrono-beacon from Sa'at. The event begins with Medivh calling for assistance and a portal quickly opening in one of the four designated zones: the first of 18 total waves of infinite dragonkin. Once a given portal has been shut or enough time has passed, a consecutive portal will be opened in a different zone and the entire encounter is timed from the opening of the first portal. At waves 6, 12, and 18, there is a boss encounter. All of the portals will spawn mobs that will seek to drain Medivh's shield and eventually kill him.

Why should the Alliance help?

Some have questioned why the Alliance should help Medivh in opening the Dark Portal. After all, it was the opening of the Dark Portal that triggered the First War and the collapse of the Kingdom of Stormwind. If the Dark Portal had never opened, the worlds of Azeroth and Draenor would have never been bridged. The orcs would have never arrived, and the wars never taken place. Chrono Lord Deja of the infinite dragonflight claims that "many lives could be saved" and "the resulting wars could be erased".

However, if the Dark Portal was never opened, it is explained by the Keepers of Time that the Alliance would have never formed. Instead, the races that form the Alliance would have descended into a chaotic civil war. Azeroth would have then been mercilessly crushed by the invasion of the Burning Legion. The Burning Legion would have then initiated an act of mass genocide, effectively destroying all life on Azeroth. This would have resulted in many more deaths than the First War and many others combined. Therefore, preserving time and opening the Dark Portal can be seen as "the lesser of two evils".

Why should the Horde help?

The Horde, having already succumbed to the demonic bloodlust on Draenor, would almost certainly have perished if they had never traveled to Azeroth. Draenor's wildlife had begun to die and the soil was turning to dust. Infighting was rampant, and Kil'jaeden had abandoned the orcs after the destruction of Shattrath City. Azeroth was salvation for the orc clans.

As mentioned above, had the orcs not traveled to Azeroth they would not have been present to join the final Alliance against the Burning Legion. While the events of the second invasion would certainly have been very different without the orcs, it's likely the legion would have pressed through via another method. The native mortal races of Azeroth would then have been woefully unprepared to face the Legion.

The events in the instance do not coincide with previous accounts of the opening of the Dark Portal. In other accounts, Medivh's involvement in the actual opening was only hinted at or not mentioned at all. These sources state that the portal was discovered by the warlocks of the Shadow Council and through their work, slowly opened. Even after the opening, it's told that it is only large enough to fit a single orc through. There was also only a single scout sent through initially. Medivh is not heard from for weeks prior to the opening, and does not return until well after the First War is under way.

This contrasts with the instance's depiction of Medivh actively channeling and calling out to Gul'dan as he does so, followed by an instantaneous opening of the full-sized portal, complete with stone arches, through which he greets a legion of orc warriors.

World of Warcraft: Chronicle Volume 2 depicts events so that the orcs built the Azeroth side of the portal after they came through the rift.

In 4.2, its attunement process was removed and it no longer requires you to run a prior CoT instance and complete the following questline: