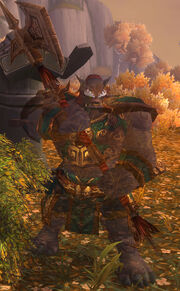 Echo of a Pandaren Monk

In the Tu Shen Burial Ground to the east, the spirits of ancient mogu are locked in battle with the spirits of our pandaren ancestors that rose up against them. The spirits have seen no rest since the return of the mogu to the valley.

If you would be willing to go to the graveyard and force the mogu to relive their defeat again, we might offer some lasting peace to the spirits of our ancestors.

The valley has lost much of its peace and tranquility since the mogu returned and set foot in it. It is a saddening thing.

The spirits of the pandaren monks seem invigorated by the deaths of their mogu oppressors. It is a small victory, but it shows respect to great heroes of the past.

Up at the burial ground, echoes of pandaren monks are streaming up the path to the top as Ancient Mogu Spirits keep dragging them into combat. Help the monks kill the mogu.