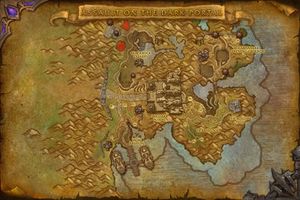 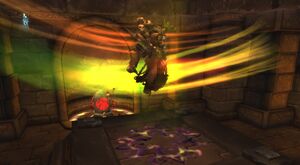 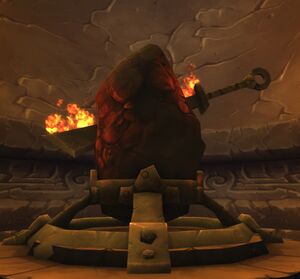 Mark of the Burning Blade 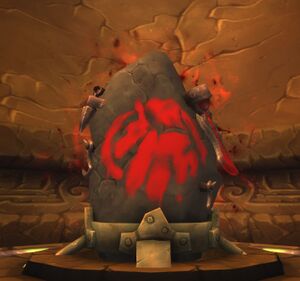 Mark of the Shattered Hand 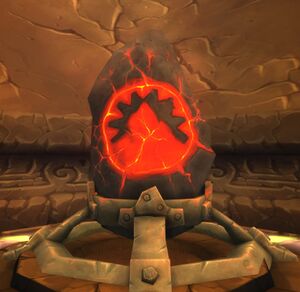 Mark of the Blackrock 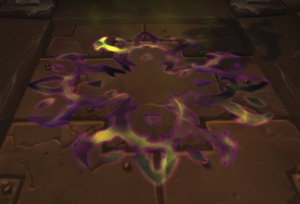 This portal is fueled by powers neither mechanical nor arcane.

Look to either side of us, <name>. The screaming souls of slain prisoners are being channeled into the heart of the portal itself.

And they are channeling these souls through the body of Gul'dan.

Find a way into the chamber beneath us, and do whatever it takes to get Gul'dan to stop his channeling. Our last hope rests on you, <name>.

Archmage Khadgar says: Use whatever means are necessary, champion. Azeroth's final hope lies with you.

Gul'dan... free. This was not the victory I'd planned for.

Gul'dan may be loose due to our actions, but I gladly bargain his freedom against the lives of the innocents on the other side of this portal You made a wise decision, <name>.

There are two holes that drop down to the lower level between the Fel Spires and Khadgar's position. Immediately closer to the center of the structure are passages to the interior - step inside for a short cutscene revealing Gul'dan, imprisoned as well:

Gul'dan says: Sever my bonds... and the portal falls...

There are three marks in the alcoves surrounding Gul'dan. Destroy each one:

Destroy the Stasis Rune beneath Gul'dan for a short cutscene:

Gul'dan says: Do not delay, mortal. I can feel the life-essence of your armies fading. There will be time for regret later...
The camera moves upward and turns around to show the Dark Portal as it shuts down!
Gul'dan says: We will meet again... <name>.

Exit and head back upstairs to turn in. The upper platform has been cleared and only several of the named characters are all in a group behind Khadgar: Thrall, Vindicator Maraad, Cordana Felsong, Lady Liadrin, Thaelin Darkanvil, Qiana Moonshadow, Ariok, Olin Umberhide and Hansel Heavyhands. Turn in to him. 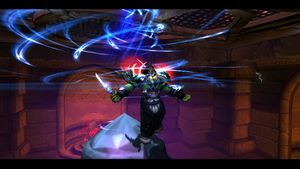 Speak with Gul'dan underneath the Dark Portal.

The mana bombs were not enough. This was always a risk.

Gul'dan, the orc beneath these grates, says he can shut down this portal. Find a way in there, and do whatever it takes to slow this portal down.

<The archmage's eyes lock with yours.>