The Power in Our Hands 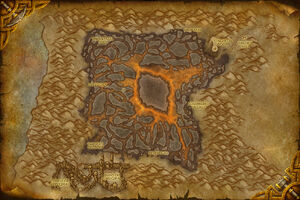 The Power in Our Hands is the Artifact capstone quest. Note that artifacts will be overpowered by this quest - all traits will be active until the release of 8.0. Don't be afraid to complete the quest for fear of losing power!

Go to the Sword in Silithus and draw its power into your artifact.

That sword of Sargeras is surgin' with dark energies. They're seepin' into Azeroth's heart like poison.

The blade's power must be snuffed out.

The Pillars o' Creation could do it, but they're keepin' the tomb sealed. So we need other vessels capable o' harnessin' vast energies.

Vessels like those artifact weapons you and the other champions wield.

It's a risk, <name>. We don't know what Sargeras' power will do ta those weapons. But unless we act now, the heart of Azeroth is sure ta die.

Yer weapon is the only thing that can contain that power!

The sword grows dark! I can hear Azeroth's sufferin' abate... if only a little.

Ye did good, hero. Bought our world some time.

But we must find a way ta fully heal this wound. No matter what happens between the Alliance and Horde, do not forget yer duty to Azeroth!

Doing this quest will increase all artifacts acquired by the character to the current maximum level. It began at level 126 (75 points in

[Concordance of the Legionfall]) when the quest was activated and has since automatically increased by one level every 2 days.

I can hear the cries of the world beneath my feet. Azeroth trembles in pain! I must find a way to ease the suffering...

I am ready. Let us begin the ritual.