The Raven Stones is part of the Druid's Swift Flight Form quest chain.

Gather 8 Raven Stones from Skettis and bring them to Arthorn Windsong at Evergrove in Blade's Edge Mountains. 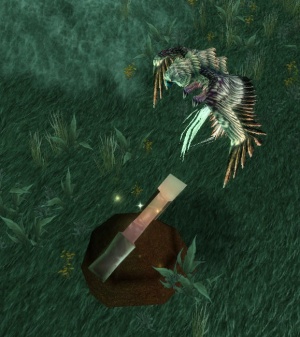 Sparrowhawk digging up a

I've trained your sparrowhawk to respond to a specific whistle. When it hears the sound, the bird will fly to you and guide you to the location of the nearest tablet fragment. Arthorn sent word that the fragments you're looking for are buried in the Skettis area of southeastern Terokkar Forest, so the bird will wait for you there.

When you've gathered all the stones, return the whistle to Arthorn and she will see to the animal's care and release.

Convey my greetings to Arthorn when you see her.

Did you recover enough of the Book of the Raven for me to reconstruct it?

<Arthorn accepts the fragments of the Book of the Raven from you and begins piecing them together.>

Some of the characters have been worn away, but I should be able to make out most of this...

[70] The Eagle's Essence is now offered.