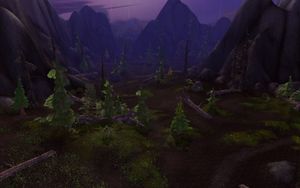 The area formerly known as the Inferno.

The Regrowth is the beginnings of the forest that once was, before it became an inferno that destroyed all of it in Mount Hyjal. The wildlife once again scatter the lands and life begins a new. The land, thanks to adventurers and Rayne Feathersong, have been protected with firewards to prevent the elementals from entering and interfering again.

This happens after completing the quest

[81] Aessina's Miracle at the Grove of Aessina. The areas of the Inferno and the Flamewake become the Regrowth and all enemies that existed in the areas (including in Ashen Lake) are removed. Nordu by now has been burned to ash and has also been removed.

Tortolla, Niden, and some guards move down to the border to the Scorched Plain.

The fire elementals, having somehow bypassing or destroying the firewards, have invaded the area once again with several types of fire elementals including core hounds, flamewakers, and even Druids of the Flame.

Gart Mistrunner, Celestine, Zen'tabra, and Mardant Strongoak patrol the western area while Ystelle Oaksong leads a small group of Hyjal Wardens patrolling eastern section of the Regrowth. Several fragments of Malorne's spirit can be seen running around the area that can be gathered by getting close to them.