From Wowpedia
(Redirected from The Reliquary)
Jump to: navigation, search

The Reliquary is a blood elven organization dedicated to the acquisition of powerful magical artifacts and studying the past, serving as the Horde counterpart to the Explorer's League.[2]

The leader of the Reliquary, Tae'thelan Bloodwatcher, had spent a lifetime mastering the arts of sorcery and furthering his pursuit of magical knowledge. Gathering like-minded blood elves, he formed the Reliquary, a primarily blood elven (but nonetheless multiracial) organization to acquire powerful magical artifacts for the sin'dorei and their Horde allies. Tae'thelan maintains that such power not only should not be feared, but can be safety utilized with proper teaching, a creed he aims to instill in allies of the Reliquary.

Through these moderate and controlled methods, Tae'thelan ultimately aims to free his people from their magical addiction, and unite them as the proud, mighty race they once were.[3]

Accounts also make mention of an unknown council based in Silvermoon ordering the Reliquary's formal creation.[4]

The Reliquary makes its debut following the Cataclysm. Under the leadership of High Examiner Tae'thelan Bloodwatcher, the Reliquary seeks to support its Horde allies, to honor its past, and to continue the task for which it was created - the acquisition of powerful magical artifacts.[5] Though still a mostly blood elf organization, the Reliquary also welcomes other members of the Horde.

They are dedicated to uncovering magical and arcane artifacts, operating around several new and revamped areas such as the Blasted Lands, opposing their dwarven counterparts to the point where overt hostilities erupt.[6][7]

The regent lord of Quel'Thalas, Lor'themar Theron, brings the Reliquary with him to the myth-shrouded land of Pandaria when he is summoned to the continent. The Reliquary disperses into multiple areas of interest: an excavation ventures to Kun-Lai Summit to discover more of the mogu, while other groups remain in Krasarang Wilds to survey the area and make the most of the neighbouring Explorer's League's missteps, overseen by Belloc and Kaelis Sunsoar. In the Vale of Eternal Blossoms, the Reliquary also uncover the earliest information regarding the

[Divine Bell], a powerful mogu artifact the Warchief of the Horde takes a deep interest in.

The Reliquary appears to have branched out its membership for the trip to Pandaria, with the likes of magi, scouts and even some Blood Knights wearing the Reliquary tabard and helping to secure the area, rather than only the diggers seen before.

A few members of the Reliquary eventually make their way to the alternate Draenor. Examiner Remy Starminder and his excavators were tasked with using this once-in-a-lifetime chance to acquire the lost artifacts of power on the continent, though this brings them into conflict with the Steamwheedle Cartel, who seek to monetize them instead.

The Reliquary has set up camps all across the Broken Isles, with Tae'thelan Bloodwatcher going to a new camp every two weeks for archaeology.

The Reliquary arrived on Zandalar after the Horde was granted sanctuary by King Rastakhan. The expedition, led by the high examiner's daughter, Tae'shara Bloodwatcher, is a joint blood elf-nightborne effort to excavate the bones of Xibala, first of the devilsaurs and mother to the great loa Rezan. The Zandalari did not object to the elves' activities, having ceded the area to local wildlife long ago. The Reliquary's blood elves have been teaching their nightborne allies the art of the dig, but some of the shal'dorei – particularly their cloistered leader, Astrandis – are rather out of their element. Astrandis came into conflict with the Dark Iron dwarves over the relics in the area.

Nerin Solvis, a Reliquary financier, is funding and overseeing the Bilgewater Cartel's activities in Vol'dun. He makes it clear to his goblin associate Merd Archfeld that neither he nor the Reliquary is interested in Gallywix's political standing with Sylvanas.

[Silvermoon City Tabard], albeit lacking the phoenix. In its place is a blue-and-gold design (presumably representing an artifact of sorts) and two cupped hands on either side of it. Though currently unavailable to players, the Reliquary tabard is seen on numerous NPCs in Mists of Pandaria; even individuals belonging to other groups (such as Blood Knights) have been seen to sport the Reliquary's colours during their tenure in its service. 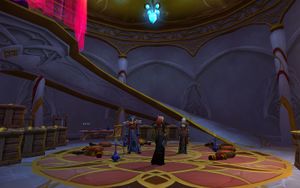 The Reliquary's headquarters in Silvermoon City.

As the name suggests, the Reliquary represents a very different side of the elves, one perhaps more in tune with (but still strikingly different to) the Farstriders. In place of wondrous displays of arcane mastery or dedicated knights in plate and mail, the Reliquary is, at a glance, a somewhat more mundane line of work: the art of the dig is certainly not a glamorous endeavor, yet still attracts a diverse variety of members. Nonetheless, when particularly formidable danger is involved, the Reliquary has members of both the Magisters and the Blood Knights on hand to ensure their work proceeds smoothly -- the former to ensure the deciphering and probing of ancient texts (as seen in the Ruins of Ogudei; and later, the grand magister himself and Archmage Aethas Sunreaver were called in to this end) comes along quickly and efficiently, while the latter occasionally serve as guards.

In addition, the Reliquary employs scouts, outrunners and -- inevitably -- adventurers. Making use of the wider Horde, the more physically powerful of the blood elves' allies have also been put to good use by the Reliquary.

The Horde's archaeology trainers are also members of the Reliquary.

Tae'thelan's stated goals for the Reliquary culminate in a desire to free his people of their magical addiction for good, by using powerful magical artifacts through controlled methods. Though the Sunwell is restored, in essence, it is not a cure for magical addiction -- but a constant source of power to keep it in check, as it was since the founding of Quel'Thalas. To truly conquer the elves' addiction to magic (as both Tae'thelan and Lady Liadrin have gone on record as stating), the elves must conquer the addiction itself as their Sunwell sustains them on this quest.

The Reliquary's more immediate goals are to amass a vast amount of magical artifacts, wealth and lore, so as to ensure it cannot be used against them.

The Reliquary also owns a physical vault (named the Grand Vault), though its location is a closely-guarded secret which only the highest-ranking members of the organization are privy to. Some believe it is not even on this plane of existence.[8]

The Reliquary may have had a bad name in the past, but they now consider it's important to maintain appearances and focus on performing acts of heroism from time to time.[9]

Fittingly, "Reliquary" is often defined as a container of sorts for hidden and holy relics. The organization as a whole represents this quite well, and even (as noted above) possesses a physical "reliquary" of their own. 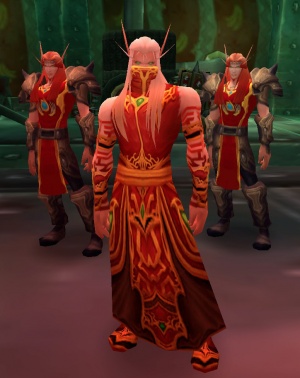 Examiner Remy Starminder and his Reliquary Knights in Warspear