The Return of Baron Geddon 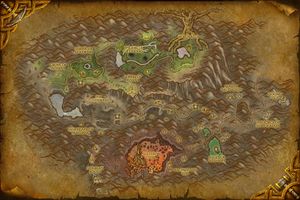 [Axe of Grounded Flame] or

Ragnaros is not the only powerful elemental that has re-emerged into our world.

The dreaded Baron Geddon is leading the onslaught and we must put an end to this rampage.

The Flameseer's Staff has proven powerful. Perhaps it is powerful enough to weaken him to the point where our arch druids can bind him where he stands.

Go, <name> and be careful. Baron Geddon is a vengeful and treacherous being.

You will also receive: 15

Well done, <name>. We cannot afford to lose any further ground in Hyjal.

By stopping Baron Geddon we will have dealt a huge blow to the enemy.

Head to the Circle of Cinders in the center of the valley. Welcome back to Molten Core. Geddon is being attacked by Galrond of the Claw, Telessra, and some Archdruids of Hyjal. Geddon has ~53 million health and maintains two classic abilities:

The bear and cat dutifully run out when Geddon casts Inferno, along with some color commentary:

The staff has a 10 yard range, so it will be necessary to move in and out too. The Archdruids are standing outside the radius of Inferno, so use them as a stopping point, or stick to Galrond. It takes 20 seconds of channeling to complete the quest, but those seconds need not be consecutive... not that they can be.

Not too far away from Geddon is Finkle Einhorn! He offers a breadcrumb to the Blackrock Caverns in the form of