The Return to Northrend (WC3 Undead)

Chapter 4 of the Undead Campaign, Act III "Legacy of the Damned" in Warcraft III: The Frozen Throne.

The Blood Elves are heavily encamped all around the shores of Northrend. You must lay siege to their island stronghold farther off the coast and take its resources for your own.

Now that you have sufficient resources, you need only break through the pass to Azjol-Nerub. Its guardians are vicious and care only for slaughter and bloodshed. Slay them, and the way through the pass is clear.

The ancient Dragon Sapphiron lies within the nearby caves. There are rumors that he guards a wondrous hoard of powerful items. Slay the Dragon and take them for your own.

King Arthas: Northrend. If feels like a lifetime since I was last here.

King Arthas: Something out there is threatening the Lich King. We must reach Icecrown quickly.

Necromancer: My king, we'll need to establish a base here first, but this island is nearly devoid of resources.
A trio of blood elf Dragonhawk Riders approach the island.

King Arthas: What the--

King Arthas: They look like high elves! What are they doing here?

Blood Elf: Prince Arthas, we are the blood elves! We have sworn to avenge the ghosts of Quel'Thalas. This dead land... will be cleansed!

King Arthas: Northrend belongs to the Scourge, elf! You made a terrible mistake by coming here. Slay them!
Anub'arak and a group of four Crypt Fiends suddenly burrow out of the ground nearby and rush to attack the elves.

Anub'arak: Onward for the Scourge! Slay them in Ner'zhul's name!

King Arthas: Who the--?
Together, Arthas and Anub'arak's forces defeat the elves.

King Arthas: Thanks for the assistance, mighty one.

Anub'arak: The Lich King sent me to aid you, death knight. I am Anub'arak, ancient king of Azjol-Nerub.

King Arthas: I welcome your aid, Anub'arak, but we have little time for pleasantries. We must reach Icecrown immediately!

King Arthas: They must have a base around here somewhere.

Necromancer: The earthquakes have shattered a glacial wall and revealed a new waterways. Perhaps our fleet can use this to our advantage.

Arthas and Anub'arak confer after destroying the blood elf base.

King Arthas: These elves are pathetic. It's no wonder we destroyed their homeland so easily.
Kael'thas teleports in.

Prince Kael'thas: Pity I wasn't there to stop you. It's been a long time, Arthas.

King Arthas: Prince Kael'thas. I haven't seen you since... You lead these elves?

Prince Kael'thas: This group, at least. What you faced here was merely a scouting force. Defeating Lord Illidan's army will be far more difficult.

Prince Kael'thas: He is. Our forces are vast, Arthas. Even now, they march upon the Icecrown Glacier. You'll never make it in time to save your precious Lich King.

Prince Kael'thas: Consider this payment for Quel'Thalas... and other insults.
Kael teleports away. Arthas suddenly suffers another seizure.

The Lich King: Make haste! My enemies draw near! Our time is almost spent!

Anub'arak: Are you well, death knight?

King Arthas: My powers are weakening, but I'll be all right.

Anub'arak: There is another route we might take, death knight. The ancient, shattered kingdom of Azjol-Nerub lies deep below us. Though it has fallen on dark times, it could provide us a direct shortcut to the glacier.

King Arthas: We have little choice. Lead on, Anub'arak.

King Arthas: Snake-men! Who the hell are they? I have never seen their like in Northrend before.

Sapphiron: You dare enter my lair? I am Sapphiron, ancient servant of Malygos the Spell-Weaver! Explain yourselves!

King Arthas: Sorry we don't have time to chat, great wyrm. We've come to murder you and steal whatever artifacts you've been hoarding over the centuries.

Sapphiron: Honesty, how refreshing. None may challenge Sapphiron and live!

King Arthas: At least I still have enough power to do this.

Sapphiron is raised by Arthas as an enormous Frost Wyrm.

Anub'arak: Most impressive. But you need to conserve your energies, death knight. We have a long road ahead of us.

King Arthas: You're certain we can reach the glacier through these tunnels?

Anub'arak: Nothing is certain, death knight. The ruins will be perilous, but it's worth the risk.

King Arthas: This does not bode well for the Lich King.

Upon Arthas' arrival to Northrend to save the Lich King, he encounters some Blood Elf scouts and finds out about Illidan's plans. Arthas then encounters Anub'arak, a crypt lord who was sent by the Lich King to aid Arthas on his journey to the Icecrown Citadel. Anub'arak tells Arthas about a "shortcut" to Icecrown, the ancient, underground kingdom of Azjol-Nerub. But before the kingdom can be accessed, the blood elf resistance must be destroyed.

After Arthas and Anub'arak manage to banish the blood elves from the nearby shore, they will also encounter Illidan's naga and their leader, Lady Vashj. Arthas finds out about the allegiance of Vashj's naga and Kael'thas' blood elves to Illidan Stormrage. Both races have established bases near the passage of Azjol-Nerub, and with the help of Anub'arak Arthas and his Scourge manage to destroy the both bases and continue their journey to the spider kingdom. 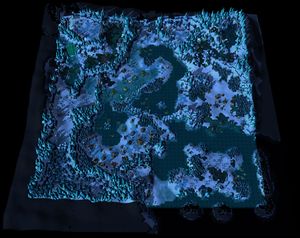