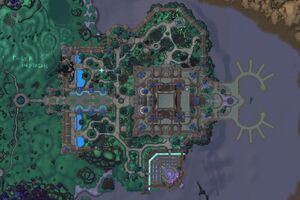 Escort your garrison forces to the Temple of Karabor by slaying all the orcs in the Path of Light.

The Iron Horde have overtaken Karabor. If we don't act now, we will lose the city.

Exarch Akama and the last of our forces are trapped within the city, but your garrison forces are still outside the temple, awaiting your orders.

Come and fly with me. We will meet your forces on the field. With the naaru by our side, we will make one last charge to retake the city!

Now it is the time to drive them out of Shadowmoon once and for all.

I am ready to join the attack against the Iron Horde.

Players hop on a fey dragon with one ability:

Blow everything up. After a while, the path will be cleared:

Vindicator Maraad yells: We've done all we can from up here...
The player confers with the draenei high above the ground before the temple building: the player to the west, Yrel to the north, Maraad to the south and Exarch Akama flys up to take position east.
Vindicator Maraad says: We've broken the main siege. We should meet with our forces on the ground.
Exarch Akama says: Champion, I need you to fight your way to the harbor.
Yrel says: I'll approach the enemy from the south. Light of the naaru, guide you.
Maraad and Yrel break off to their duties and Akama guides the commander to the north side.

The player is kicked off the mount and winds up in the Defense of Karabor scenario. Turn in to Akama and pick up

[92] The Defense of Karabor before moving on.

Now, to destroy these orcs once and for all.