From Wowpedia
(Redirected from The Ring of Blood)
Jump to: navigation, search 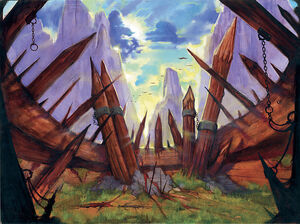 The Ring of Blood in the TCG.

The Ring of Blood is a quest chain given by a goblin named Gurgthock in the very north of Nagrand, at the Laughing Skull Ruins. Completing the quest line simply involves one fight after another.

The enterprising Gurgthock has turned an area of the ruins into a pit for some good old-fashioned deathmatches. The player starts off as an inexperienced newbie, and finds him or herself steadily pitted against more powerful foes as they win their matches. The fight only ends when one side is a red stain on the ground! Since the enemies encountered in the Ring of Blood are very powerful, this must be done in a group, preferably with a proper tank, a dedicated healer, and lots of dps.

Only one group can be doing a Ring of Blood fight at a time. After each fight everyone in your party must talk to the NPC to turn the quest in, and then one of you talks to the NPC to start the next fight. The NPC is not available during fights. The result can be frustrating if several groups are trying to do the Ring of Blood at the same time, as everyone is madly trying to talk to the NPC at the same time and start their next fight. (Note: As soon as you drop one of the opponents, another group can start their quest. This does not interfere with your progress. After the other group has finished off their mob, you can trigger your groups next encounter.) Your entire group MUST stay within the ring for the duration of the fight, although if you have any non-party members helping, they can stay on the sidelines (the quest cannot be raided, but other players can help out). If any party member dies within the ring, they should not release until they get quest credit for a kill. 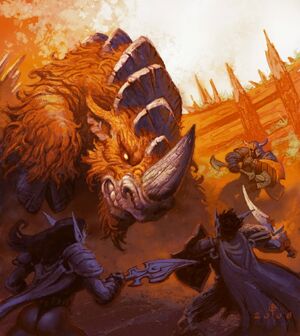 [67G5] The Ring of Blood: Brokentoe
The first quest will pit the party up against Brokentoe, an old and powerful Clefthoof.

[67G5] The Ring of Blood: The Blue Brothers
After conquering Brokentoe, Gurgthock's next challenge is a pair of Lost Ones from the Murkblood tribe, calling themselves The Blue Brothers. (probaply reference to music film, blues brothers)

[67G5] The Ring of Blood: The Warmaul Champion
After defeating Skra'gath, Gurgthock's next challenge is either an Orc, Ogre, Lost One, or Ethereal that is chosen at random.

[67G5] The Ring of Blood: The Final Challenge
After defeating the champion, Gurgthock's final challenge is the ogre that has been watching you all along. Mogor, Hero of the Warmaul decides to fight you last. Once he is killed the first time he will reincarnate and fight you again.