The Ring of Blood: The Warmaul Champion (quest)

They had to ship the champion in from the Blade's Edge gladiator pits. He was training on mountain giants - three at a time.

If you win this one, you become the new champion. What do you think your odds are, kid? Do you have a shot? Just give me the word and I'll bet the house on you.

Now get in there and win! 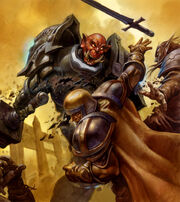 You're in the big leagues now! The Warmaul Champion is either an orc, fel orc, ogre, Lost One, or ethereal - this is chosen at random, and he is always lvl 67 elite. He's the hardest fight in the arena. He hits hard, too, so be wary. He does

[Mortal Strike], along with random charges at your group members. Once the Champion is eating dirt, there's only one final task...