The Ruins of Dalaran (WC3 NightElf)

The Ruins of Dalaran is chapter 7 of the Terror of the Tides campaign.

It was a climactic three-way conflict between Malfurion Stormrage and Maiev Shadowsong's night elves and Kael'thas Sunstrider's blood elves on one side; Illidan's Naga on the other hand; and the Scourge occupants of the area making up the third side.

Later that evening, at the night elves' base camp, Malfurion returns to warn Maiev and Tyrande of his brother's dangerous sorcery.

Having captured the Eye of Sargeras on the Broken Isles, Illidan Stormrage traveled to the continent of Lordaeron and then to the ruined city of Dalaran to begin the task that the Archdemon Kil'jaeden had set him: the destruction of the Lich King. Using the incredible demonic magic of the Eye, Illidan began a spell which began to literally tear apart the continent of Northrend, the seat of Ner'zhul's power. Having initiated the spell, Illidan banished four Naga Summoners and set them to channel the spell, whilst he marshalled his forces into defense of the ruins.

Unaware of Illidan's intentions, Malfurion Stormrage and Tyrande Whisperwind had joined Maiev Shadowsong in her quest to bring Illidan to justice, and had trailed Illidan to Lordaeron. Troubled by the ravaged state of Lordaeron's forests, Malfurion traveled on his own into the heart of the trees in order to convene with their spirits. Maiev and Tyrande made the acquaintance of Prince Kael'thas, and aided him in retreating with a group of his people through Scourge territory. However after holding back a horde of approaching Undead on a bridge, Whisperwind was washed away by the river deep into Silverpine Forest, which was then a Scourge stronghold. Horrified, Prince Kael suggested they attempt to rescue her, but Maiev reminded him of his promise to help the Night Elves capture Illidan, which she believed took precedence.

Meanwhile, Malfurion's meditation was interrupted with terrible visions of wild magic being unleashed upon Northrend. Realising this to be the work of Illidan, he quickly reconvened with Maiev near Dalaran, who told him that she had seen Tyrande "torn apart with my own eyes". Driven mad with grief, Malfurion resolved to destroy Illidan once and for all, even as his brother's mighty spell entered its final stage.

Illidan's Summoners have begun channeling a powerful spell through the Eye of Sargeras that threatens to tear the planet asunder. Time is running out as they come ever closer to finishing their diabolical chanting. You must slay all four Summoners before time runs out, but they have turned ethereal and can only be harmed by magic. Use one of the following to damage the Summoners.
Faerie Dragon - Mana Flare
Chimaeras - Attack
Druid of the Talon - Attack
Maiev's Fan of Knives or Shadow Strike Spells
Malfurion's Entangling Roots Spell

There is a Paladin being held behind the Naga. Break him free of his cage, and he may aid you in the destruction of Illidan's forces.

Malfurion arrives at the night elf and blood elf base outside Dalaran.

Malfurion Stormrage: Maiev! We've got to move quickly. Illidan is weaving a spell that is splitting apart the roof of the world! We must... Wait--where is Tyrande?

Maiev Shadowsong: I am sorry, Shan'do, but the priestess has fallen. We aided a band of Alliance warriors against the undead. The priestess fought valiantly, but I saw her torn apart with my own eyes.

Malfurion Stormrage: Torn apart? Tyrande, my heart...I should have been there.

Maiev Shadowsong: You can still avenger her, Shan'do! Let us attack Illidan together! He is the reason we even came to this forsaken place. He is the reason for your loss.
Kael'thas runs up to the pair.

Maiev Shadowsong: Shan'do, this is Prince Kael'thas, the ally I spoke of.

Prince Kael'thas: Greetings, great druid. My scouts have confirmed that this Illidan and his vile snakes are based at the ruined city of Dalaran. They are using a gem-like artifact to perform some strange ritual.

Maiev Shadowsong: They must be using the Eye of Sargeras! But why would they strike at the roof of the world?

Malfurion Stormrage: It doesn't matter. They won't live long enough to finish their spell. Illidan must be stopped once and for all!

Prince Kael'thas: We'll hold the naga back for as long as we can! For Quel'thalas!

Prince Kael'thas: The naga have captured some human paladins! If we could free them, they might aid us against Illidan!

Paladin: Our righteous might will always overcome the forces of darkness! We shall aid you against these unholy beasts.

Illidan Stormrage: No! The spell is not done! It is not done!
The Eye explodes. In the aftermath, Illidan is left kneeling on the ground while Maiev, Malfurion, and Kael'thas appear on a rise overlooking the area.

Malfurion Stormrage: It is over, brother. Your vile schemes end here.

Maiev Shadowsong: Illidan Stormrage, for recklessly endangering countless lives and threatening the very balance of the world, I hereby sentence you to death!

Malfurion Stormrage: Too much blood has been spilled on your account, Illidan. Even now I can feel the lands of Northrend reeling from the spell you cast. Imprisonment will not be enough this time.

Maiev Shadowsong: I will execute him myself!
Maiev blinks into the area with Illidan.

Illidan Stormrage: Fools! Can you not see? The spell we channeled was meant to strike at the undead--our common enemy! My mission was to destroy the Lich King's stronghold of Icecrown!
Malfurion traps him in entangling roots.

Malfurion Stormrage: At no heed to the cost? Because of you, Tyrande is dead!

Prince Kael'thas: Your pardon, Lord Stormrage, but the priestess may still be alive! She was swept downriver, but it's premature to simply assume that--

Malfurion Stormrage: You told me she was torn apart! You lied to me.

Maiev Shadowsong: The Betrayer's capture was our primary concern, Shan'do. I needed your help. I knew you would go to her and we would lose our chance! I...

Malfurion Stormrage: Just who is the betrayer now, woman? I must go to her immediately.

Illidan Stormrage: Believe me, brother, despite all our differences, you know that I would never lead Tyrande to harm. Let me help you. My naga can scour the river for us! Let me do this, at least.

Maiev Shadowsong: What? After all he's done, you would trust this traitor to--
Malfurion removes the entangling roots from Illidan and places them around Maiev.

Malfurion Stormrage: Silence! I will deal with you later. Let's go--brother.

The Scourge of the area had been stirred into action; Prince Kael marshaled his forces into defending the Night Elves from the Undead so they could concentrate on attacking the Naga. As the Night Elves tested the Illidari defenses their scouts found that the Naga had captured a Paladin by the name of Magroth the Defender. The Night Elves rescued him and the grateful Human reciprocated by lending his holy powers to the Elven assault.

Illidan and his Naga defended the four Summoners bitterly as the mighty spell caused the ground to shake and thunder to roll. Having broken the Naga line of defence, Malfurion and Maiev organized flocks of Faerie Dragons and Chimaera to attack the banished units. At last, the final Summoner fell, the Eye of Sargeras was destroyed and the Naga retreated in disarray. Illidan was entangled by Malfurion even as he pleaded with his brother that the Archdruid didn't know what he had just prevented.

Brushing aside Illidan's pleas, Malfurion prepared to kill Illidan for his reckless actions and for the slaying of his beloved, Tyrande. At this point Prince Kael interrupted, suggesting that Tyrande may very well be alive, as she had only been washed away downriver. Realizing that he had been tricked by Maiev, Malfurion turned his entanglement on the unrepentant Warden and united with Illidan, who was shocked that his actions had inadvertently endangered the life of his one-time love, in an attempt to track her down.

It is thought that Lady Serpentra was slain during this battle; it is not clear why Lady Vashj was not present. Magroth the Defender went on to marshall attempts to rescue human survivors of the Scourge from Lordaeron, and was slain by Prince Arthas in so doing. 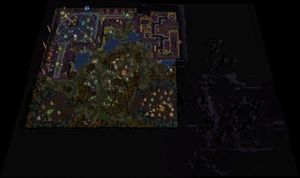