[Waywalker's Girdle] You will also receive: 5

Sage Paluna at Camp Oneqwah wants you to decipher the three Rune Plates. 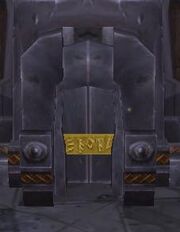 The rune plates seal the doors

Brann's journal also contained a guide to iron dwarf symbols. I've inscribed these on a keystone which will help you to understand the words inscribed on the rune plates.

From the journal entries, it seems Brann may be chasing after clues to the origins of his people. Keep your eyes open for any clues as to his destination.

Return to Thor Modan, northeast of here, stand before each of the plates, and use the stone to determine the contents of each. We can't allow the Alliance to find him first.

You will also receive: 5

Have you discovered Thor Modan's secrets?

<Sage Paluna listens as you recall the translations of the plates.>

'The cradle of stone and iron.'

'Ulduar nestled in the storm.'

I will ask the chieftain to dispatch longrunners to the Storm Peaks. My best people know these lands well and have the best chance of tracking down this wayward dwarf.

The prophecies can be found on the closed doors in the tunnel. Wander around; #1 is on the north side, #2 and 3 are on the south.

First Prophecy: 'Shall return to the cradle of iron and stone.'

Second Prophecy: 'Return to Ulduar, nestled in the embrace of the storm.'

Third Prophecy: 'Greatest of the Maker's children, arise and claim your birthright.'