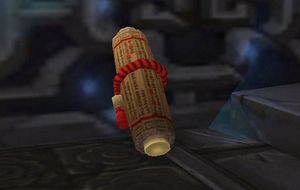 in the central building of the Diremoor on the Isle of Thunder. Interacting with the lore object is one of the requirements of the Pandaria exploration achievement

In the days before Lei Shen founded the old empire, there stood a high plateau shrouded in perpetual storm. It was called the "Thundering Mountain," and was the ancestral seat of the one the mogu once called "master."

History does not record what Lei Shen found when he ascended the mountain and disappeared into its vaults. But when he returned, he wielded the power of a thousand storms and declared the mount to be his seat of power. Atop its summit he built a majestic and forbidden city.

It is said that after Lei Shen's death, the mountain listened to no other, and the storms battered it unceasingly. Future emperors moved the seat of imperial power to the Vale of Eternal Blossoms.

Even in the time of the last pandaren emperor, Shaohao, the Thundering Mountain was still viewed from below with awe and terror. The Sundering that shattered the world nearly sunk the mountain into the sea, but perhaps the last emperor thought that it was worth saving. Or maybe he feared the mountain's secret so much that he wanted to hide it away. Like the rest of Pandaria, the mountaintop city - now an island - was hidden away in the mists.