The Schools of Arcane Magic - Abjuration 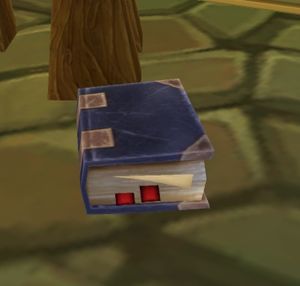 "The Schools of Arcane Magic - Abjuration" is a rare book that spawns in Dalaran Visitor Center [52.2, 55.2]

. It is a requirement of the

The Schools of Arcane Magic - Abjuration

Abjuration is the study of protective magic and one of the most important schools for a young mage to study. The most generalized abjuration spell is the mana shield, a spell that transmutes raw mana into a barrier that protects the caster from attacks. Properly executed, this spell can protect the mage against even the most formidable of attacks - but the mana shield is very difficult for a novice to master. It often takes a mage months of practice to even conjure a simple mana shield, and thus, more basic alternatives exist.

A series of elemental armor spells were invented to aid the traveling mage in the unfortunate case that he or she might be attacked. These spells require far less raw energy to cast then a mana shield and are more easily maintained over time, but lack the raw potency of the mana shield. Rather than stopping an attack completely, a frost armor spell might simply decrease the effectiveness of the assault. The more advanced armor spells grant other benefits - for example, the potent mage armor spell actually assists the caster in regaining magical power more easily.

Practitioners of the arcane arts are often ambitious, and we frequently find ourselves in situations where magic may slip just slightly beyond our control. It is for this reason that the ward spells exist. Ward spells are quick, potent incantations to protect the caster against a form of elemental damage - damage which is often caused by the caster attempting one of the other schools of magic. This is why studying abjuration early is so imperative.

One of the most renowned practitioners of Abjuration magic is Prince Kael'thas Sunstrider. While the prince is quite formidable in all schools of magic, Kael'thas has created a variation of Mana Shield that is practically unsurpassed in among the residents of Dalaran. Also notable is the Arcanist Doan, who has perfected a spell that combines Evocation and Abjuration to shield himself for a short time while preparing a powerfull area-of-effect spell. This Detonate spell provides Doan with a degree of near invulnerability for a precious few seconds, but few mages have the capacity to cast it safely.

The book is sometimes referred to as DVC.