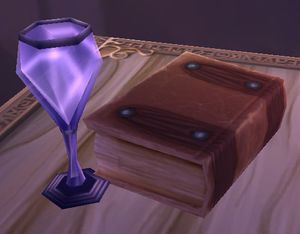 [Higher Learning] achievement. When it is not pretending to be a ham sandwich, it can be found in the north corner of Violet Hold[64.4, 52.4]

(left as you come in off the street).

Illusion is the art of deceiving reality itself. The mists of illusion can make a mage invisible or inaudible to the world or twist the image of a location into something entirely different. Illusion can be used for disguise or manipulation, but beware, spells to counteract illusions exist in the divination school. It is not viable to base your entire career on illusionary magic.

Contrary to popular belief, illusions are far more than mere parlor tricks. The spell of invisibility is among the most integral in a battle mage's repertoire, as you will often find yourself in dangerous situations and in need of a quick method for a strategic retreat. Illusions can also be used to deceive your opponents into thinking that you are elsewhere, or even trick your enemies into fighting each other. This is no easy task, but the accomplished illusionist can turn allies into enemies - and his or her own enemies into allies.

The former archmage Jandace Barov - may her soul rest in peace - was an excellent example of a talented illusionist. In life, she developed a spell that displayed several images of her body that were nearly indistinguishable from her real form. These images duplicated her actions from different locations, making it nearly impossible for her enemies to find her. It was almost infallible. Which brings me to another lesson - almost is simply not good enough.