The Search for Baine 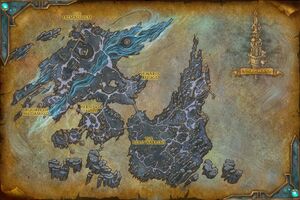 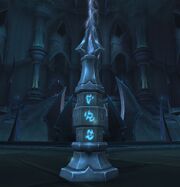 Enter Torghast and search for Baine.

I dare not step inside the the tower.

You however don't seem to be cursed like the rest of us to remain trapped here.

While I cannot tell you exactly where your comrades may be, I shall give you a gift.

Use it inside Torghast, it should take you somewhere near to your missing ally, Baine I believe was his name.

Either that or you'll end up trapped in Torghast's ever shifting halls for all time, but those are the risks one must take.

You are my eyes, <name>. Press on. I will be watching.

Finding Baine was no easy feat. But you braved the horrors of that tower and succeeded.

But I fear your work is only just beginning.

Run through the Portal to Torghast. Head east to the main hall and interact with the Wayfinder:

<When infused with an Attuned Shard, this device can open hidden pathways within the tower.>

<Use the Attuned Shard with the Wayfinder.>

Accept the instance invite to enter this special wing of Torghast, serving as a full tutorial. Just on the other side is an anima cell, offering a choice of powers. Accept it, trigger the Mawsworn guard, then start killing a path through enemies.

Mawsworn Guard yells: Intruders are here!
Warden Arkoban yells: Guards! It seems there are interlopers among us! To your posts!

The trash in here are not intended to be too difficult, as this is another tutorial run. Make sure to loot mobs and Ashen Phylacteries for their

Interact with Bound Soul Remnants to free them, gaining an untimed stacking 1% buff to primary stats (strength/agility/intellect). Keep an eye out for more anima cells as well.

In the next, flooded room, the warden calls out:

Warden Arkoban says: Still you continue? Very well, the scavengers will feed on your essence.

Waves of Starving Mawrats will aggro. Clear them, then take out the floor boss, an empowered version of a normal enemy. The floor boss drops an anima hoard, and don't forget the bound soul next to him, then head upstairs to the next floor.

The second floor has the first environmental enemy, Soul Emanations, which constantly launch missiles into the vicinity. Should a player get hit by one they will find themselves randomly a few yards away and stunned. Nothing to this floor, so kill a path through it up to the next.

The third floor is a safe floor, with no enemies to kill, plenty of souls to free, and anima cells to plunder, along with a cameo by the Tarragrue. Additionally, players will come across their first broker, who will exchange the looted Phantasma for anima powers, utility items, and anima cells. Purchase as desired, then move on. Remember that Phantasma is a use-it-or-lose-it currency - should players leave Torghast, their phantasma will be lost.

The fourth floor has a bonus objective, started by an out-of-the-way friendly NPC. Opt to help the friendly NPC and they will join the party, helping in combat. Get to the end of the floor, where Arkoban taunts the player, summoning two hounds: Lor the Loyal and Ventun the Ravenous. Defeat them and the floor boss before turning in the quest, which awards another anima cell, themed to the questgiver.

Warden Arkoban yells: Ah, the vermin have arrived. Know that none can escape these halls.

The fifth floor introduces locked chests. There are several varieties:

The chest, once unlocked, awards an anima cache.

The sixth and final floor is the boss floor. Use up as much phantasma as possible, as it won't have any use after the upcoming fight. Step into the boss arena to find Warden Arkoban and Baine Bloodhoof! Arkoban has the following abilities:

Baine Bloodhoof says: I was dreaming of home... only to awaken in this place of torment.

[The Forgotten Key], which starts a quest:

Interact with Baine to free him:

Baine Bloodhoof says: Champion! I... I saw you escape before we were recaptured. Do you have the means to take us out of the Maw?
Baine walks slowly to the end portal.

Follow Baine out of Arkoban back to the ground floor, then head west to the exit Torghast door:

<The gateway thrums with familiar power. You sense it leads back into the Maw.>

Take advantage of this opportunity to talk to Ve'nari for

[50] Prison of the Forgotten.Hold off on returning to Torghast right now, what with Baine in tow and all, make for the waystone:

Baine Bloodhoof says: The waystone worked! What a... remarkable place!

Return to the Enclave and turn in to Bolvar.

Even with our bond, <name>, my vision in the tower is shadowy. Dim.

I cannot sense our allies.

However, we know where Baine might be. Find a way into Arkoban Hall.

Even through our bond, <name>, my vision into the tower is shadowy. Dim.

I cannot sense the location of our allies.

However, there is an object of power nearby that beckons us. It may lead you further into the tower's halls.

This is no doubt a dangerous course, but it is our only clue as to where Baine might be.

Let us hope this obelisk shows you the way. Stay on your guard.