The Search for Illidan (WC3 BloodElf)

For the TCG set, see The Hunt for Illidan. For the quest, see

[110] The Hunt for Illidan Stormrage.

The Search for Illidan is chapter 4 of Curse of the Blood Elves.

While searching for Illidan, Lady Vashj is surprise when she catches the scent of Night Elves. Soon after she and Prince Kael'thas discover that the Warden Maiev Shadowsong has captured Illidan within a cage and launch an attack to free him. The battle becomes a tug of war which each side trying to gain control of the cage so that it would be directed to their base. Eventually the combined Naga and Blood Elf forces prove successful and Illidan is freed.

After three days of fruitless searching, Prince Kael'thas and Lady Vashj realize they are lost in the barren wilderness of the Hellfire Peninsula.

Lord Illidan has been captured by the cunning Warden in a cage of magical enchantments. Slay the guardians of the cage and take it from the Night Elves before they reach the safety of their base.

Though free from the Warden's grasp, Illidan remains weak, and the enchantments on the cage cannot be broken easily. You must escort Illidan's cage to the Blood Elf base, where the protection of Kael's army will give you time to break the magical locks.

Prince Kael'thas: This place is unnerving. We've marched for three days and seen no signs of life. Still, I can't shake the feeling that we're not alone out here.

Lady Vashj: We aren't. I caught the scent just as the wind shifted...
They walk just a bit further and see a night elf base.

Lady Vashj: Night elves! What could they be doing here?

Prince Kael'thas: The warden, Maiev, swore to capture Illidan at any cost. She must have brought her warriors here to hunt him!
They spot Maiev and the Watchers transporting a cage.

Prince Kael'thas: There! Illidan lies chained in that cage! The night elves must be taking him to their stronghold.

Lady Vashj: Then we must rescue him before they reach safety.

Lady Vashj: There is still time, Kael. If we move quickly, we can reclaim it before the night elves reach sanctuary.

Vashj breaks Illidan out of the cage.

Illidan Stormrage: Lady Vashj, your rescue was most timely. The thought of spending another ten thousand years in Maiev's prison was not a pleasant one.

Lady Vashj: We could not forsake you, Lord Illidan. But you owe your freedom to them.
Vashj turns to the nearby blood elves.

Illidan Stormrage: Who are they, Vashj? The young elf looks familiar, but...

Lady Vashj: They call themselves the blood elves, my lord. They are the last mortal descendants of the Highborne who served you long ago.

Lady Vashj: This is Prince Kael'thas. He and his brethren have come to bask in your wisdom--and pledge themselves to your will.

Prince Kael'thas: We have to bring the cage back to the Draenei village before we can free him! 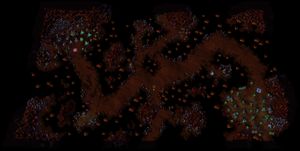