The Search for the Highlord

Recover Tirion Fordring and the Ashbringer from the Broken Shore.

Tirion is fading away on that infernal shore... and the Ashbringer with him! We must not waste another moment.

Give the word and we'll set off. We're ready when you are.

Interact with the Argent Hippogryph to fly to the Broken Shore and start the scenario. 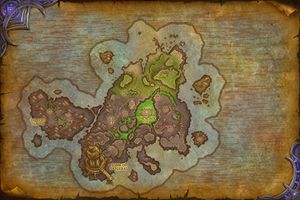 Inside the scenario, the wing flies to the Shattered Edge:

Use the quest item, the

Help clear the first wave of adds. Once they fall, Zerus summons some infernals.

Move forward and kill the two Dark Inquisitors that are torturing Stormwind Soldiers, as Jailer Zerus chimes in:

Jailer Zerus says: You will suffer for a thousand lifetimes.
Highlord Tirion Fordring says: <Name>! By the Light... you must vanquish this foul demon!

Zerus has the following abilities:

Interrupt Drain Life and step out of the Jailer's Prison area of effect.

Kill Zerus to start the next stage.

Enter the cave to the east and start killing a path through Ravenous Felstalkers.

Two Wrathguard Cleavers and an Eredar Deathspeaker guard the path. While fighting them:

Balnazzar says: Ah, the Light's greatest champion has arrived to claim the holy Ashbringer and lay waste to my kin.
Balnazzar says: They say only the pure can wield the highblade. Come, champion - claim your destiny.

After defeating them, move to the next room to find the Ashbringer embedded in a ruined platform. Interact with it to acquire the Ashbringer!

Balnazzar says: I've been waiting for you, paladin. Know that I will rip the soul from your flesh and make your body my own.
Balnazzar says: I will turn you into a weapon of the Legion. I will use your hollow shell to corrupt and destroy everything you ever loved, piece by piece.
Balnazzar says: Now, kneel. Kneel before your master.

Highlord Tirion Fordring whispers: Give me the strength... to shatter these bonds...
Balnazzar says: You cannot fight my will. You are mine.

Balnazzar says: Very well. This will be a fine test.

Balnazzar has the following abilities:

Balnazzar says: Know that I am Balnazzar. Know that you are but a pawn in plans beyond your reckoning.

Balnazzar says: You are out of your league, paladin.

Balnazzar says: I am nathrezim. You efforts mean nothing!

Balnazzar says: Impressive. I did not expect you to attune to the Ashbringer so quickly. No matter, I will finish you off personally.

Balnazzar says: Give up, before I lose my patience.

Balnazzar says: Enough. Never again will that damned blade slay my brethren! YOU... WILL... DIE!

Balnazzar says: You think this is over, paladin? Our journey together has just begun...

Final Stage: The Fate of the Highlord

Lord Maxwell Tyrosus says: <Name>, you must come quickly. Tirion called for you by name. I fear he does not have long for this world. Hurry!

Run back to the west to find Tyrosus:

Lord Maxwell Tyrosus says: We have to get out of here before more demons come. Quickly, the Highlord is just outside the temple.