The Secrets of Guo-Lai requires honored standing with Golden Lotus before Leven Dawnblade will offer it.

He in the Guo-Lai Halls 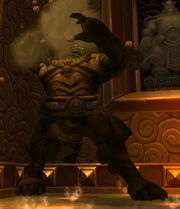 Meet with He Softfoot in the Guo-Lai Halls and uncover the mogu's purpose in the western chamber.

I just received information from a guard stationed near the Ruins of Guo-Lai that the Shao-Tien leader entered the the halls, killing two of my men in the process. They're intent on something inside. We need to stop them.

He Softfoot has already followed them in. He should be waiting for you at the entrance to the western chambers.

Move quickly, <name>. I don't like the thought that the mogu may be a step ahead of us.

What are you waiting for? Find He. Stop the Shao-Tien!

The Shao-Tien were spotted marching out of the halls with a hundred jade statues. The mogu now have an immense jade army to turn against us, and we've yet to uncover their other goals in the Vale. We are all in danger.

I had thought you and He dead. It's good that I was mistaken on that last part at least. Rest. Recover. There will be much fighting ahead.

This quest is offered by Leven to adventurers who have reached honored reputation with the Golden Lotus.

Head to the northwest corner of the valley to return to the Ruins of Guo-Lai and the entrance to the Guo-Lai Halls. Shao-Tien soul-callers and dominators are on patrol. The soul-callers have raised mogu statues to help defend.

Enter the halls and take the first left at the bottom of the ramp in the big room where Zhao-Jin the Bloodletter was earlier. At the far end of the hall, He Softfoot is standing, poised for action. Speak with him:

<He looks down the hall intently.>

Let's go.
He points down the hall ahead.

He drops into stealth and starts moving down the Hall of Statues. The Jade Sentinels in the first room start slowly making an overhand strike with their hammers. If an unwary adventurer is in the area of effect when the strike lands, he or she will take 64,814 Physical damage from a Jade Smash:

Get out of the area of effect and keep moving through the Hall of Statues to reach the Guo-Lai Vault. There, Zhao-Jin is standing before a large statue. Get close:

Zhao-Jin starts awakening Crumbling Jade Warriors, level 90 terracotta warriors with 393,000 health, but have are weakened and take bonus damage from all attacks.

The Jade Colossus snags He Softfoot and starts strangling the life out of him. Zhao-Jin stops spawning Crumbling Jade Warriors, so finish the last of them off and turn to the Jade Colossus. It is too focused on He to fight back, so damage it until it releases He.

Mount up and head back to Leven Dawnblade at the Golden Pagoda.

This completes "The Jade Army" criterion of

[Eternally in the Vale].