From Wowpedia
(Redirected from The Sha'tar)
Jump to: navigation, search

For the organization from an alternate universe, see Sha'tari Defense.

The Sha'tar, meaning "Born from Light" in Draenei,[1][2] are a faction of powerful naaru led by A'dal. They rule over a rebuilt Shattrath City.[3] With the help of the Aldor and the Scryers, they lead the battle against Illidan and the Burning Legion.[3]

The naaru are a part of the Army of the Light.[4]

Right before the invasion of Outland began, Khadgar and Velen reached out to the naaru independently, both seeking aid against the dark forces amassing on Outland. The Army of the Light heard their pleas but the Army's battles with the Legion were costly and ceaseless, so they could not spare soldiers to protect Outland. Instead A'dal, M'uru, and O'ros volunteered to help the people of Outland and arrived with Tempest Keep.[5][6]

According to the Broken Alexius and Khadgar's Servant, this group of naaru were drawn to the ruins of Shattrath when they sensed the Aldor priests performing rites inside the rubble of one of their temples.[1][7]

With the objective of fighting the demons of the Burning Legion, this group of naaru came to Outland aboard the transdimensional fortress known as the Tempest Keep. They left their ship and explored the ravaged domain, where they found a ruined city in Terokkar Forest.

Shattrath City, meaning "dwelling of light", was once the draenei capital on Draenor, but when the Burning Legion turned the orcs against the draenei, the fiercest battle was fought there. The draenei fought tooth and nail, but in the end, the city fell. The city was left in ruins and darkness until the Sha'tar arrived.[2]

A draenei priest order helped them rebuilt the city.

However, Illidan Stormrage sent an army of blood elves to lay waste to the city. But the leader of this forces, known as the Seer, pledged his forces to A'dal. Voren'thal claimed that he had seen A'dal in a vision, in which it was revealed to him that the blood elves' survival lay with the leader of Shattrath City rather than the elves' increasingly twisted prince, Kael'thas Sunstrider. The Scryers then joined the forces of the Sha'tar and supported their war effort.

The Sha'tar are the main faction in Shattrath City, assisted by the Aldor and the Scryers from their respective tiers. Led by A'dal, the Sha'tar oversee the running and defense of their city (including the care of displaced refugees and orphans from all over Outland) as they stand in defiance of both the Burning Legion and Outland's capricious master, Illidan Stormrage.

They maintain the Sha'tari Base Camp to defend the area around Shattrath City and keep the peace within the city itself. Xi'ri and Marcus Auralion led an incursion into Shadowmoon Valley, but their forces are drawn from the divided Aldor and Scryers.

After Kael'thas Sunstrider's defeat, the Sha'tar formed a coalition of Aldor and Scryers named the Shattered Sun Offensive, which took the battle against the Legion to the Isle of Quel'Danas. The Blood Knight matriarch Lady Liadrin traveled to Shattrath to reveal the prince's abduction of M'uru. A'dal pardoned Liadrin for her order's maltreatment of the naaru, informing her that M'uru had long known of his fate and played his part accordingly. Liadrin pledged to aid the Sha'tar in the defeat of Kael'thas and Kil'jaeden, and the Blood Knights fought beside the offensive in relieving the isle.

A'dal, leader of the Sha'tar, sent General Tiras'alan and other draenei to Theramore,[8] commanding them to protect and defend the port city against the Horde.[9]

Both Alliance and Horde players begin as Neutral toward the Sha'tar. Players can increase their Sha'tar reputation through various quests, by raising their reputation with the Aldor or Scryers, or by adventuring into Tempest Keep. Such players may wish to keep an eye out for the activation of

[A'dal's Song of Battle], a +10% reputation buff granted to anyone in the Tempest Keep instances for two hours. (This occurs after any player on the server completes the quest for defeating Kael'thas Sunstrider.) 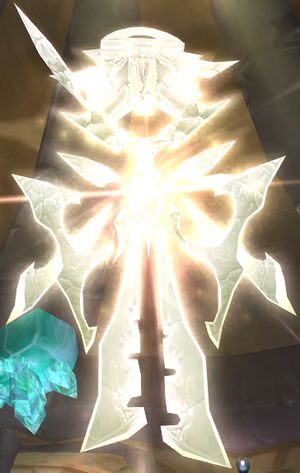 The Naaru A'dal, leader of the Sha'tar

After exhausting the reputation rewards from Aldor/Scryer turn-ins and Mechanar runs, players may wish to complete the few Sha'tar quests available. In addition to the quests, instance runs in Tempest Keep: Botanica, Arcatraz and Mechanar will continue to grant reputation. At this point, it is probably more worthwhile to run these instances in Heroic mode.

Reputation rewards can be purchased from Almaador located Northwest of A'dal in the center of Shattrath City. He's standing below the smaller naaru, G'eras, that sells equipment for Justice points.

Arcanist Xorith and Haldor the Compulsive will sell specialized Flasks only usable in raid zones to players who are exalted with Cenarion Expedition, the Sha'tar and the respective faction (Scryer or Aldor). The flasks are only purchasable with

[Mark of the Illidari] obtained from creatures in Tempest Keep: The Eye, Serpentshrine Cavern, CoT Mount Hyjal, or the Black Temple.