From Wowpedia
(Redirected from The Shattered Halls)
Jump to: navigation, search

The Shattered Halls is a level 70 elite instance in Hellfire Peninsula, being the third wing of Hellfire Citadel, with Kargath Bladefist as the final boss. The instance is one of the first endgame instances in The Burning Crusade players will encounter.

Shattered Halls has a very straight layout with only one way to go. Several increasingly large packs test the group's focus and crowd crontrol or aoe abilities. The most difficult being the last one before the first boss. A rogue can lockpick the door to Grand Warlock Nethekurse, (or an engineer with a

[Elemental Seaforium Charge] can blow it open) and thus avoid the sewers - an area with large groups of slime mobs and several single ones on a fast respawn timer.

After Nethekurse you enter the gauntlet event. Archers from the far side will shoot fireball arrows that leave burning spots on the ground while you fight your way ahead. There are some static mobs as well as small packs that continuously spawn at the end and come your way. All of these mobs are nonelite. The respawn is on a static timer. Thus, if you kill them fast enough, you will leave combat. Depending on your group, you may either kill them one pack at a time or run right through to the last alcove and AOE them down all at once.

At the end of the gauntlet - on heroic mode - Blood Guard Porung awaits you. You will encounter two more large packs flanked by two groups of gladiators each. The packs can and should be pulled out of the room to avoid adding the gladiators. The gladiators will fight among themselves and can be pulled when most of them are already low on health. From here on you will encounter stealthed assassins in increasing frequency as you make your way past Warbringer O'mrogg and on to Kargath Bladefist. 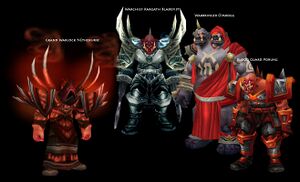