The Shores of Northrend (WC3 Human)

The Shores of Northrend is Chapter Seven of the Human Campaign, The Scourge of Lordaeron.

One month later, along the icy coast of Daggercap Bay...

Arriving at Northrend Arthas would quickly reunite his old friend and teacher Muradin, who after reinforcing the Muradin's base camp would be forced to deal with the undead. After learning that Muradin's additional forces were cut off from him the two would work together to rescue them, which not only destroyed an undead outpost besieging them but granted them additional reinforcements for the attack on the main undead stronghold in the area. With the undead destroyed in the region, Arthas would command his forces to build their main base camp over the ruins over the undead stronghold.

There are many threats, both seen and unseen, in this frozen wasteland. Thus, before the hunt for Mal'Ganis can begin, you must first set up a base camp and bolster your forces.

Mal'Ganis' citadel lies somewhere within the arctic wastes of Northrend. You must discover his remote lair and crush his standing forces. Only then will the fiend be vulnerable to attack.

You must find Muradin's missing comrades and aid them in defeating the Dreadlord's insidious Undead minions. 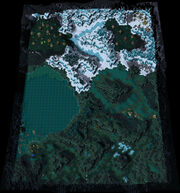 Captain: This is a Light-forsaken land, isn't it? You can barely even see the sun! This howling wind cuts to the bone and you're not even shaking. Milord, are you alright?

Arthas: Captain, are all my forces accounted for?

Captain: Nearly. There are only a few ships that--

Arthas: Very well. Our first priority is to set up a base camp with proper defenses. There's no telling what's waiting for us out there in the shadows.

Arthas: Ah, a gold mine! We'll set up our base there.
The Peasants walk up to the gold mine to prepare the base when gun shots are fired.

Muradin Bronzebeard: Bloody hell! You're not undead! You're all alive!

Arthas: Muradin? Muradin Bronzebeard, is that you?

Muradin Bronzebeard: Damn, boy. I never imagined that you'd be the one to come to our rescue!

Arthas: Rescue? Muradin, I didn't even know you were here.

Muradin Bronzebeard: Just the same, lad, I could use your help. My mates and I were attacked, and we got separated. I'd appreciate any backup you could give me.

Muradin Bronzebeard: That's them! And they're still under attack from the undead!

After destroying the undead base...

Arthas: All right, Muradin. What were you doing up here, anyway?

Muradin Bronzebeard: Well, lad, there's an ancient way gate that lies somewhere in this glacial wasteland. Supposedly, it transports you to a hidden vault where a runeblade named Frostmourne is held.

Muradin Bronzebeard: We came here to recover Frostmourne, but the closer we came to finding the way gate, the more undead we encountered.
The Captain runs up to Arthas.

Captain: Prince Arthas, we haven't found any trace of Mal'Ganis.

Arthas: No matter. He can't hide from me forever. Captain, I want you to establish this site as our primary base.