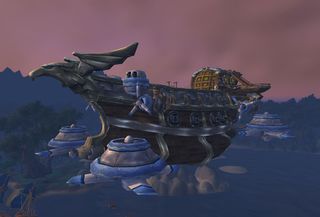 “Men, you've trained for this. You're among the elite. You are Skyfire men! This is the ship that took down Deathwing. You think some raggedy little Horde outpost stands a chance against the pride of the Alliance fleet? NO! Those green dirtbags down there plagued your homes in Southshore, laid siege to your children in Redridge, and massacred every man, woman and child in Theramore. It. Is. PAYBACK TIME!”

— Sky Admiral Rogers, commander of the Skyfire, before battle

The Skyfire was an Alliance gunship and navy flagship, which first saw action during the war against Deathwing. Since its first deployment against Deathwing himself in Dragonblight, the Skyfire served frequently in many of the Alliance's subsequent campaigns, including the offensive in Pandaria, the Siege of Orgrimmar, and the war in the Broken Isles. Its prestigious service and fierce reputation led it to become known as the pride of the Alliance fleet.[1]

Originally captained by Sky Captain Swayze, following the defeat of Deathwing the Skyfire was overhauled and placed under the command of Sky Admiral Rogers. The gunship would eventually be heavily damaged during a battle with the Horde's Windrunner Fleet in Stormheim and subsequently crash, though much of the crew would survive. 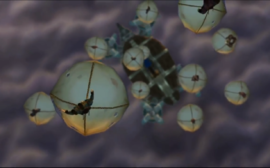 Heroes on board the Skyfire parachute on to the back of Deathwing.

The Skyfire, helmed by Sky Captain Swayze, was first called into service to aid in the defense of Wyrmrest Temple during the final battle of the war against Deathwing. Along with a Horde gunship, the Skyfire engaged the Black and Twilight dragonflights in the skies of Dragonblight to protect Thrall and the Dragon Aspects as they prepared to use the Demon Soul against Deathwing himself. Once the Destroyer had been wounded by the Demon Soul, he attempted to flee toward the Maelstrom across the Frozen Sea. Thrall, the Dragon Aspects, and champions of the Alliance and Horde boarded the Skyfire and quickly set off in pursuit.[2]

During the chase, the gunship was assaulted by the Deathwing's personal escort of drake riders, led by Warmaster Blackhorn. The Skyfire's crew would fight to repel this attack, dealing with boarders, sappers, fires, twilight dragons, and eventually Blackhorn himself and the dragon Goriona. Having defeated the assailants, the Skyfire would catch up with the Black Aspect and drop a party of heroes onto his very back by parachute. Sky Captain Swayze himself was among those who undertook this mission and was eventually thrown from Deathwing's back, falling into the Frozen Sea. The efforts of the Skyfire and its crew proved a major contribution to Deathwing's eventual defeat at the Maelstrom. 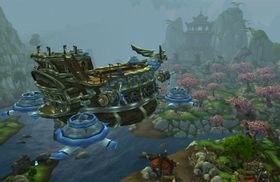 The Skyfire in the Jade Forest.

After the victory over Deathwing, Sky Admiral Rogers became the new captain of the Skyfire, and the gunship was given a complete overhaul. These improvements would include a full complement of both fixed-wing and gyro aircraft as well as a battery of 18-inch smoothbore shore bombardment cannons, and the Skyfire was returned to active duty in the Alliance navy.

Upon the discovery of the mist-shrouded land of Pandaria, the Skyfire was chosen to undertake an elite mission to the continent to search for the missing Prince Anduin Wrynn, referred to in code as the "White Pawn". Specially-selected Alliance agents were also chosen to accompany the mission, along with Stormwind's SI:7. Upon arriving in Pandaria's Jade Forest, the gunship came upon a major Horde presence established in Garrosh'ar Point. Sky Captain Rogers quickly ordered the Skyfire to engage the enemy, and a battle between the two sides broke out.[3]

The Skyfire's airborne forces were successful in wiping out much of the Horde fleet and other forces, while its guns bombarded the enemy positions from above and its marines eventually cleared out the base. In the aftermath of the fight, Sky Admiral Rogers would order the deaths of a number of defeated orc troops, which subsequently led to the appearance of the sha. The Skyfire would later depart from Pandaria and rejoin the main Alliance fleet to provide escort, leaving Captain Taylor and his unit on their own in the Jade Forest to discover the whereabouts of Prince Anduin.

Two months after the battle at Garrosh'ar, the Alliance's 7th Fleet arrived in the Krasarang Wilds of Pandaria, bringing with it an invasion force, launching Operation: Shieldwall. The Skyfire would join the campaign in the region against the Horde based from Domination Point. During the conflict, the gunship would serve as a forward command post for an Alliance assault on the Horde's main base, accompanied by a squadron of battleships. The Skyfire's air fleet would ultimately cause serious damage to Domination Point's defenses, though the Horde also fielded powerful surface-to-air artillery.[4]

At some point during the Pandaria campaign, the Skyfire would also champion the Assault on Zan'vess against the sha-corrupted mantid. Their objective was to secure a major mantid weapons cache, to prevent the forces of Warchief Garrosh Hellscream from doing the same.

Much of the Alliance navy was marshaled in preparation for the Battle for Broken Shore, where the combined might of Azeroth's major factions hoped to drive back the invasion of the demonic Burning Legion. The battle would ultimately go extremely poor for the Alliance and Horde, who suffered a major defeat.

The Skyfire was called in to evacuate King Varian Wrynn, Genn Greymane, and a besieged group of Alliance forces near the Tomb of Sargeras. As it prepared to depart from the battle, the gunship was hampered by a massive fel reaver, which threatened to destroy the ship. Only the sacrifice of King Varian himself preserved the vessel, who leaped onto the fel reaver and managed to destroy it with Shalamayne. Though the Skyfire and the other Alliance members escaped, Varian was subsequently slain by the warlock Gul'dan. 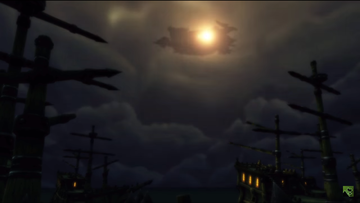 The Skyfire opens fire on the Windrunner Fleet. 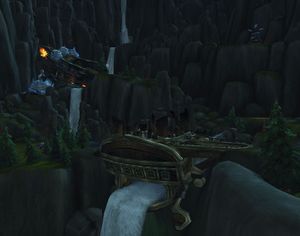 The remains of the Skyfire in Stormheim.

The Skyfire returned to Stormwind City after the disaster on the Broken Shore, where many of its occupants would attend King Varian's subsequent funeral at Stormwind Keep. Not long afterward, the ship was prepared for a major Alliance expedition to Stormheim (receiving an installation of new guns[5]) with the stated goal of retrieving the Aegis of Aggramar, though unofficially to also gain revenge against the Horde and Sylvanas Windrunner for their perceived betrayal in the previous battle.

When the Skyfire arrived on Stormheim's northern coast, it spotted the Forsaken Windrunner Fleet below, and the vengeful Sky Admiral Rogers and Genn Greymane quickly ordered an attack on the Horde fleet. The Skyfire's opening volley caused great destruction, and a large battle quickly broke out between the two sides. Marines from the gunship began systematically boarding and seizing enemy ships one by one, searching for Sylvanas. Upon taking the Windrunner, the Dark Lady's flagship, they discovered that the Warchief had already departed. While this had been happening, Horde forces had also managed to board the Skyfire itself and sabotage the vessel.

The Alliance boarding parties returned to the gunship and attempted to repair the damage done while dealing with the Horde infiltrators, though it proved in vain. A fierce battle on the upper deck between Genn Greymane and the Forsaken lieutenant Nathanos Blightcaller continued, but the damage in the Skyfire's hold triggered a major explosion before one could slay the other. Hopelessly devastated, the Skyfire lost control and crashed hard into the mountains of midwestern Stormheim.[6]

In the wake of the crash, the surviving crew (including Sky Admiral Rogers) rallied to the Skyfire Triage Camp.[7] From there, they began to salvage what remained of the Skyfire,[8] rescue any other surviving crew members,[9] and deal with the Horde boarders who also endured the crash. Despite the terrible loss of the ship, most of the crew apparently survived,[10] and were able to make contact with the Alliance navy afterwards. Though regretful, Sky Admiral Rogers remained determined that as long as the survivors kept fighting, the Skyfire would live on.[11]