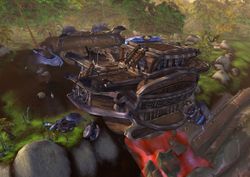 The wreckage of the Skyseeker on the Wandering Isle.

The Skyseeker is an Alliance two propeller gunship under the command of Captain Delora Lionheart. After leaving Pandaria's Jade Forest, it captured several Horde prisoners during a naval battle before crashing on the Wandering Isle.

Prior to the arrival of Skyfire in Pandaria, the Skyseeker landed on the northern coast of the Jade Forest. After Captain Doren sent the ship back to Stormwind City for reinforcements, it ran into Horde forces at sea. The survivors of the ensuing battle were taken aboard as prisoners,[1] but while transporting them back to Stormwind the gunship flew into a thick mist, which completely concealed Shen-zin Su from their view, the turtle upon which the isle is located. With no landmasses recorded on their charts and not expecting any obstacles, the crew was shocked and surprised to suddenly plow into a forest right in their flight path, likely at full speed.[2]

After the collision, the Alliance sailors and Horde prisoners were forced to work together as the crash had severely injured Shen-zin Su. The native pandaren helped remove the Skyseeker's wreckage and heal Shen-zin Su's wound.