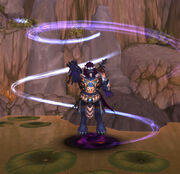 Kill Shadowmaster Sydow and recover the beads from his corpse.

A single large mogu performing a ritual on the lake caught your attention while you were killing the other mogu in the area. It seems unwise to let his ritual complete.

[Treasures of the Vale] and 24

<He looks at you expectantly.>

<As you hand the beads to He, his smile suggests that he understands perfectly what they symbolize. He nods approvingly.>

[90 Daily] The Silent Approach, if Sydow is on the lake, this quest will automatically start.

A level 90 mogu, Shadowmaster Sydow has 1,969,000 health and the following abilities:

Note the lily pads on the lake. They can be walked on! Sydow will not move from his position, so he will not need to be tanked normally. Don't bother interrupting the shadow bolts, move out of the fissures, but get UNDER WATER when he casts Unleash Souls to avoid the ~150,000 damage attack.