The Spirit Kings is the fourth boss encounter in Mogu'shan Vaults. It is a council encounter with four bosses activated successively.

Main articles: Zian of the Endless Shadow, Meng the Demented, Qiang the Merciless, Subetai the Swift

Ancient records tell of these legendary rulers, powerful mogu who carved an empire from the very rock of Pandaria. Their names still cause the land to tremble: Zian of the Endless Shadow, Meng the Demented, Qiang the Merciless, and Subetai the Swift. Some say their spirits lurk in the vaults, lost in ghostly memories of battle and glory.

The Spirit Kings animate in sequence, with one king attacking the players until defeated, at which time another king enters the fray. Defeated kings become incorporeal, but continue to bring one of their powerful abilities to bear periodically.

On Heroic difficulty, each Spirit King animates and joins the battle when its predecessor is brought below 30% of maximum health.

The Bossses share a 10 minutes Enrage timer in all difficult settings: 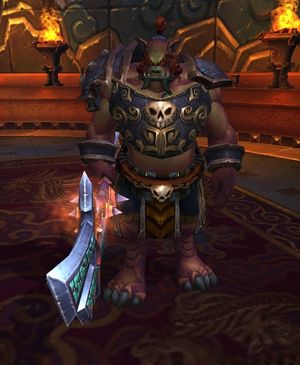 When the players defeat the Warlord King, he remains in battle in a weakened state and only uses his Flanking Orders ability. 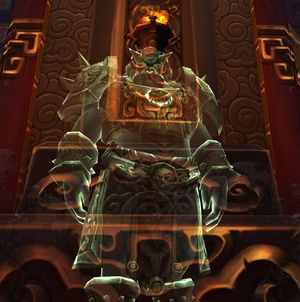 When the players defeat the Mad King, he remains in battle in a weakened state and only uses his Maddening Shout ability. 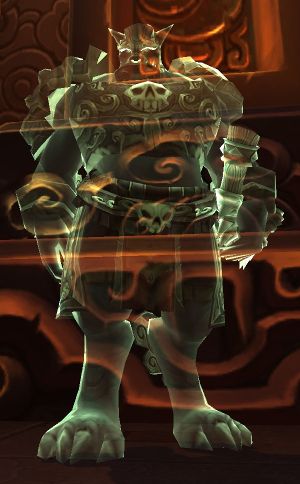 When the players defeat the Bandit King, he remains in battle in a weakened state, only able to use his Pillage ability. 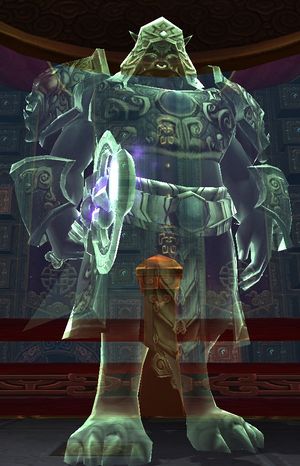 When the players defeat the Sorcerer King, he remains in battle in a weakened state, only able to use his Undying Shadows ability.

The fight is a lot about paying attention to what happens and adapt accordingly.

Lorewalker Cho says: Ah, the ancient Vaults of the Kings of Mogu'shan. What might this button do?
Lorewalker Cho says: Look here! It's the history of Zian of the Endless Shadow, a powerful sorcerer who kept the kingdoms in check through terror and darkness.
Lorewalker Cho says: This looks to be the record of Qiang the Merciless, a great conqueror who ruled his vassals with an iron fist!
Lorewalker Cho says: I've heard tales of this one: Subetai the Swift, well known as a masterful archer and genius thief. He stole from the rich and kept everything for himself.
Lorewalker Cho says: What is this? I've heard nothing of this emperor. Meng the Demented? According to these texts, Meng was the most foul and maniacal ruler to ever abuse the imperial throne.

Intro
My armies are endless, my power, unmatched.

Enters the fight
I will crush you, in body AND spirit.

Unused quote
I cannot be... defeated.

Enters the fight
Soon you will understand why my subjects fear the shadows!

Undying Shadows
The darkness comes for you, and with it, death.

Death
The darkness... surrounds me...

Unused quote
I sense...courage. Willpower... light? That will not do.

Enters the fight
You have angered the emperor! THE SENTENCE IS DEATH!

Lorewalker Cho yells: A secret passage has opened beneath the platform, this way!

Lorewalker Cho: Ah, the ancient Vaults of the Emperors of Mogu'shan. What might this button do?

sarcastic episode of The Daily Blink

The Daily Blink How Not To Die: Spirit Kings
Retrieved from "https://wow.gamepedia.com/index.php?title=The_Spirit_Kings&oldid=5495936"
Category: