The Stone of the Tides 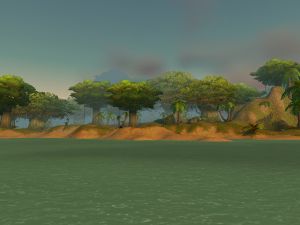 "Stone of the Tides"

The ancient Gurubashi Empire was a source of many fascinating and intriguing legends that can be no doubt traced to their environs, as examinations of their belief systems and societal practices have pointed to a great reverence for their natural surroundings. While I have delved into many aspects of their snake-worship in previous volumes of this study, I put forth here an examination of the trolls' interesting and unique relationship with the sea.

The Gurubashi Empire was surrounded on three sides by the sea, so it comes as little surprise that water would figure prominently as an aspect of their society. While the trolls were able to roam and control the large areas of their jungle empire, the sea eluded them. It was vast and immeasurable, no doubt a disconcerting neighbor for the powerful trolls. It should be noted here that recent discoveries seem to suggest that the trolls had little interest in exploring the lands beyond the Great Sea. While the troll species have been encountered along the length and breadth of Azeroth, Khaz Modan and Lordaeron, little evidence of their civilization has been found in the newly discovered lands of Kalimdor or upon the islands in the South Seas. Whether this demonstrates an unwillingness of the trolls to venture away from their terrestrial holdings or a failure on their part to develop the technologies needed to make such a journey will take further research and analysis that is out of the scope of my writings here. But one can hardly ignore so large a presence, and new findings in the extensive troll ruins of Stranglethorn Vale show and aspect of their relationship with the sea previously unknown and undocumented.

[Stone of the Tides]". Various fragments of the troll legends can be pieced together to paint a rather complete picture of the Stone and its importance to the ancient Gurubashi Empire. It appears that the Stone of the Tides allowed its bearer to control water in its many forms, rivers, rain, and the tides. Because of the stories related to use of the Stone of the Tides. I have conjectured that it is actually a physical manifestation of the powers of the Waterlord, a powerful elemental of the seas. How and why such an object would leave the Waterlord's control and fall into the hands of the trolls is another question that is beyond the scope of my knowledge.

Like the movements of the eponymous tides, the Stone of the Tides entered the world of the trolls and departed, never constantly staying in the trolls' hands for longer than a generation at a time. In troll legends, it is said that the first time the Stone of the Tides came to the Gurubashi Empire, it was found by a troll warrior wandering along the coast of Stranglethorn. He came upon a mysterious blue stone within which milky white strands floated and flowed. Intrigued by the stone, the warrior took it with him and continued upon his journey. Over the weeks and months, the warrior discovered that the stone had given him control over water. He could summon forth water elementals, creatures formed completely of water--duplicating a feat that only powerful mages of the Kirin Tor are able to perform.

The warrior traveled to Zul'Gurub, to the heart of the empire, to show his newfound abilities to the Emperor. He easily gained a court audience after demonstrating his powers in the center of the Imperial capital. His powers easily amazed the Gurubashi Emperor, who immediately gave him a place of honor at court, naming the warrior "Tidebearer", leaving his old name behind. For years, the Tidebearer served the Gurubashi Empire, summoning his thrall water elementals in battle and manipulating the flow of water in Stranglethorn Vale for the benefit of the Empire. But as the years went on, the Tidebearer became more reclusive, tending to stay for long periods of time away from court.

Modern day accounts of the Stone of the Tides have appeared from place to place, but one must still wonder why an object of such power would appear with such regularity, and by whose design.