For the achievement and related title, see 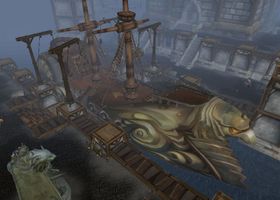 The Stormbreaker docked in Valiance Keep

During the conflict, the destroyer made numerous trips between Valiance Keep and Alliance territories to the south, delivering supplies and reinforcements for the Northrend expedition.[1] Unbeknownst to its captain, "Lefty" Lugsail, the Stormbreaker was also used by members of the Cult of the Damned to gain passage to Northrend in order to serve the Lich King. Though this had occurred on many Alliance ships, it was on board the Stormbreaker that it was first discovered by Alliance agents, after which Admiral Cantlebree, and eventually General Arlos, were informed.[2]