Take Brann's vessel in Azsuna to the Sunken Vault.

'Ello, High Priest. The Speaker has just been telling us of a calling of sorts, coming from deep in the core of Azeroth.

The voice is telling 'im there's a lost Titan vault out there, near the Maelstrom. We dun know what's inside, but he's got tha feelin' it's got somethin' ta do with the Light, and you!

Brann's got a vessel waitin' for ye, of the coast of Azsuna. Of course, I'll be accompanying ye as well, for cataloguing purposes. Can't go and let a chance like this go to waste!

You will also receive: 19

Ta be one o' tha first to step foot in a lost Titan vault, it gives me tha chills!

Tis our greatest honor ta present ye with this steed, High Priest. An' thank ye for leading us, ye truly are blessed by the Light, an' so are all of us for havin' ye. 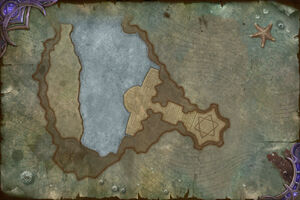 The submarine is located at the Old Coast Path south of Illidari Stand.

Quest accept
Brann Bronzebeard says: I borrowed a small submarine from friends o' mine in the Explorers' League. We'll be embarkin' off the coast o' Azsuna as soon as ye can join us, High Priest.

Brann Bronzebeard
We think the lost titan vault lies just northeast of the Maelstrom. Shouldn't take us long to find out.

I am ready to head to the Maelstrom.

Stage 1: A Call from the Depths

Brann Bronzebeard says: Whoa, that's a large door! Gotta be a lever around here somewhere, though. There's always a lever!
Brann proceeds to look for a lever on both sides of the door.
Magni Bronzebeard says: Revola ruk maez amir.
The door to the Primordial Observatory opens, causing Betild to laugh.
Betild Deepanvil says: Well, I suppose ye don't need ta be lookin' fer levers and switches n'more, Brann!
Brann Bronzebeard says: Bit of a shame, that.
The dwarves and the priest adventurer enter what appears to be an observatory.
Betild Deepanvil says: A lost titan vault... kept in immaculate condition? This be one fer the record books! What d'ye suppose be in these bubbles, eh?

Console activated
Magni Bronzebeard says: They must be activated simultaneously. High Priest, would ye do the honors?

Go to the console on the right side of the room and activate it.

The first group consists of Earthen Vault Guards and Vault Preservers, both of which can be easily defeated.

The second group consists of Holy Lightspawn, which can be quickly dealt with if your specialization has

The final type of mob activates at this point, the Vault Sentinels. Avoid their AoE.

The rest of the fighting is composed of a mix of the three mob types. Brann, Betild, and Magni will talk some more during and after the fighting.

As noted, speak to Brann to return to Dalaran.

Are ye ready to leave, High Priest? Just gimme the word an' I'll point the sub back towards Dalaran.

I am ready to head back to Dalaran.