For the unrelated quest, see 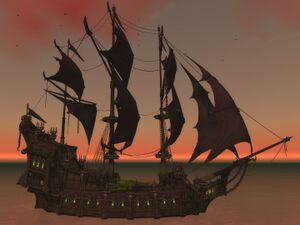 The Swift Vengeance is a battleship of the Forsaken navy used during the Fourth War. Some time after Sylvanas Windrunner raised Derek Proudmoore and attempted to torture him into subservience, she had him moved from Dazar'alor onto the Swift Vengeance. Baine Bloodhoof, Thomas Zelling, and a Horde champion attacked the ship and stole it.[1] The ship then sailed to the ruins of Theramore where Baine returned Derek to his sister, Jaina.[2] Afterward, Thomas took the ship near Chandlery Wharf to leave it under the guise of an Irontide pirate raid gone wrong while the champion was sent to Nathanos Blightcaller to report that they saw a Forsaken vessel in that area.[3]