From Wowpedia
(Redirected from The Taunka)
Jump to: navigation, search

The taunka (also known as winter tauren)[2] are an ancient offshoot of the yaungol and relatives to the tauren who have adapted to the harsh environment in Northrend. Unlike their more peaceful tauren relatives, the taunka forcibly bend nature and the elements to their will in order to survive.

The taunka were long thought to be lost until they were re-discovered by Garrosh Hellscream and his orc forces upon their arrival in Northrend.[3] Due to being forced to migrate from their homes by the encroaching Scourge, the taunka have largely given their allegiance to the Horde.

Although they appear similar to the tauren, they resemble bison more than cattle, and are referred to as bison-men by Apothecary Malthus.[4]

The taunka are the descendants of a bovine race known as the yaungol. Several millennia before the First War, the yaungol roamed central Kalimdor and lived in peace with the demigod Cenarius, but were eventually driven south due to not wanting to share hunting grounds with the trolls. There, the yaungol were enslaved by the mogu empire and twisted by the mogu flesh-shapers. Though they eventually regained their freedom along with the other slave races during the pandaren revolution, much of their ancient cultural heritage had been lost. Heated arguments led many yaungol to migrate back north. One group, who would later take up the name "tauren", resettled in central Kalimdor and rediscovered their ties to Cenarius, while the more nomadic tribes traveled across the entire continent, only stopping when they reached the frigid lands near the Storm Peaks. There, titan-forged machinery such as the Forge of Wills transformed these northern yaungol into a new subspecies, known as the "taunka". The taunka, tauren and yaungol retained some contact with one another for many years, but the Great Sundering finally shattered the connections between the tribes.[5]

4,500 years prior to the First War, shockingly vicious and bloody battles erupted between the normally peaceful taunka and forest nymphs of Northrend. When word reached the night elf druids of the Cenarion Circle, the elves conducted an expedition to find the cause of the brutal conflict. To their immense horror, they discovered that the roots of the World Tree Andrassil had reached so far into the ground that they had come into contact with the prison of the Old God Yogg-Saron. The malevolent being's energies had spread through the tree, slowly driving all lifeforms in the area to madness. As a result, the Cenarion Circle were forced to fell Andrassil, killing it in order to stop its suffering. Forever after, it would be known as "Vordrassil", or "Broken Crown".[6] 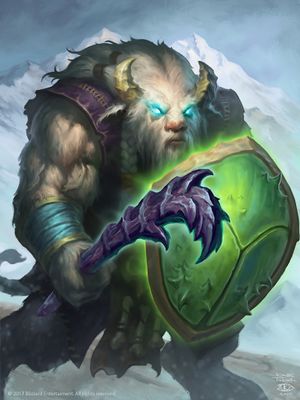 A taunka scavenger in Hearthstone.

Tenacious and stoic, the taunka are well aware of the rigors of living in the harsh wastes of Northrend. Although they may seem dour or even cold to outsiders, those who come to know them will soon recognize an embattled race of survivors characterized by colossal hearts and unshakable resolve.[7]

Unlike the tauren, the taunka have surived only by forcing the land and the elements to yield to their will. Their relationship with nature has been one of constant struggle and grim perseverance.[7][8][9] When asked if taunka were dark shaman, Dave Kosak said that "taunka are taunka".[10] 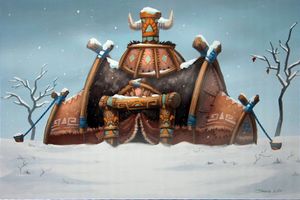 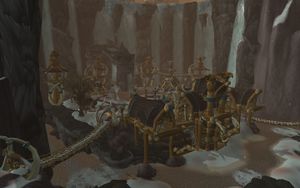 Most of the taunka camps are either destroyed, evacuating, or planning to evacuate. The only two exceptions to this are currently Oneqwah and Tunka'lo. Oneqwah is where the Camp Winterhoof taunka are evacuating to.

Breadcrumb to Camp Winterhoof, you may only complete one...

While attacking Skorn, find a drop that begins:

While Dealing With Gjalerbron, find a drop that begins: