From Wowpedia
(Redirected from The Tauren Chieftains)
Jump to: navigation, search 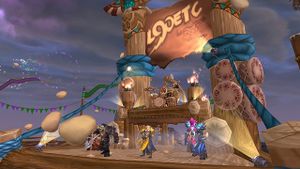 In concert on Darkmoon Island. 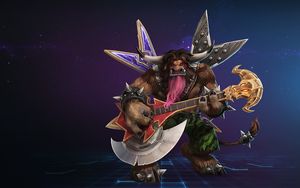 The band's mascot, the Elite Tauren Chieftain, as seen in Heroes of the Storm.

Elite Tauren Chieftain (abbreviated for simplicity as ETC; for other and previous names see below) is an American band comprised of employees of Blizzard Entertainment. The band's virtual alter ego, The Tauren Chieftains and the Elite Tauren Chieftain,[1] appear in World of Warcraft as a band comprised of members of the Horde, and retain the logo used by the Level 70 Elite incarnation of the real-life band. Their gimmick revolves around writing content that is based on mainly subjects related to the Warcraft universe, though they have more recently extended into StarCraft and Diablo lore as well. The band debuted in 2003 with their first song, "Power of the Horde", which was featured in the credits of Warcraft III: The Frozen Throne and Warcraft III: Reforged.

Elite Tauren Chieftain originated as a band of Blizzard employees doing cover songs, eventually graduating to performing their own unique songs. During the development of Warcraft III: The Frozen Throne, the idea came up that the band could do something fun in the game's end credits, specifically a Warcraft-inspired song. Since there was not enough time to write entirely new music, Samwise Didier took one of the band's existing songs—"The Serpent and the Slave"—and altered the lyrics to be Warcraft-themed, thus creating "Power of the Horde". Since people "weren't offended by it enough", Elite Tauren Chieftain eventually kept doing more songs.[2][3]

On July 16, 2007, the band, then known as Level 70 Elite Tauren Chieftain, released their second song, "I Am Murloc." On August 4, 2007 at that year's BlizzCon, the band performed two new songs, "Rogues Do it from Behind" and "Terran Up the Night".

On June 29, 2008 at the Worldwide Invitational in Paris, France, Level 70 Elite Tauren Chieftain performed "Power of the Horde", "Rogues Do it from Behind", "Terran Up the Night" (a new song), "Raise Some Hell" (referring to Blizzard's newly announced development of Diablo III), and "I Am Murloc." After each song, the band "levelled up" twice before ending their set as Level 80 Elite Tauren Chieftain.[4] The band has yet to release any studio recordings under their current name.

E.T.C. hasn't played since Metallica closed the show for them during the BlizzCon 2014 Closing Ceremony. Samwise Didier has stated that the band definitely wants to play again, but at the time, the Heroes of the Storm team was also the StarCraft team. This meant that the team had to work on two games at the same time before BlizzCon, which "ate into practice time".[2]

ETC have been known by various names throughout the history of Warcraft. 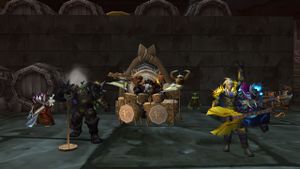 The Tauren Chieftains can otherwise be found at rest in Silvermoon City's Walk of Elders on a balcony overlooking the walk. Their stage manager and stage tech, Michael Schweitzer and Roitau respectively, both sit below the band. Their purpose in Silvermoon City was initially uncertain, but it has since been learned that the band is placed there as part of the Children's Week quest chain for Horde players, which begins in Shattrath City.[5] Performing emotes to them, such as cheer, will cause them to respond in turn. The band and their manager remain friendly to Alliance players and will still respond to emotes. 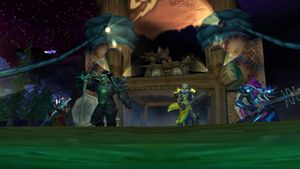 The Tauren Chieftains performed during the duration of the

[WoW's 15th Anniversary] in the Caverns of Time. 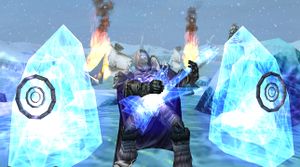 Arthas Menethil, performing during the credits of Warcraft III: The Frozen Throne. Menethil was replaced by Bergrisst as the band's lead guitarist, with the World of Warcraft incarnation of The Tauren Chieftains. 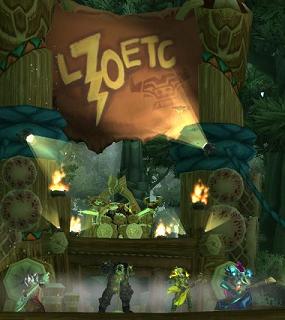 The band performing at the Darkmoon Faire in Terokkar Forest.

Level 60 Elite Tauren Chieftain (L60ETC) is undoubtedly best known for their multimillion-selling single, "The Power of the Horde," a track that appeared on their 2003 album "Warcraft III: The Frozen Throne." In addition to the hard-rocking, heart-thumping tunes it contained, that album might best be remembered by music lovers everywhere for the popular little computer game that was included as a bonus feature on the disc.

The band performed at BlizzCon 2005 on October 29, 2005. This performance was recorded and included on the The Burning Crusade Behind-the-Scenes DVD.

Comin' straight outta Outland: Level 70 Elite Tauren Chieftain invades Southern California once again to perform at BlizzCon. Taking a break from their massive multi-world tour of Azeroth and Outland, Level 70 Elite Tauren Chieftain is gracing the mortals in Anaheim, California with another evening of power, majesty, and metal! The group's last non-Azerothian performance, the final show of the highly successful Storm, Earth, and Fire World Domination tour, took place at BlizzCon 2005, where they received a hero's welcome and even had the multi-platinum recording artists, The Offspring, close the show for them. Now, having levelled past their previous name -- Level 60 Elite Tauren Chieftain -- the crunching chords and pounding war drums of the newly dubbed Level 70 Elite Tauren Chieftain will once again be echoing throughout the Anaheim Convention Center's main arena at BlizzCon 2007. Exclusive to BlizzCon attendees, the concert will start at 7:30pm on Saturday, August 4, preceding the other live entertainment that evening. Get there early because seating will be first-come, first-served.

To celebrate the upcoming BlizzCon event on August 3rd and 4th, Level 70 Elite Tauren Chieftain will be making a guest appearance beginning tonight at midnight at the new Darkmoon Faire location outside of Shattrath city! They’ll be shaking Shattrath to the ground with their performances at the top of every hour for the duration of BlizzCon, and showing everyone the true Power of the Horde![7]

Elite Tauren Chieftain appears as a legendary card in Hearthstone. The golden version of the card is no longer obtainable and was given out to those who attended BlizzCon 2013 or bought a Virtual Ticket. When played, the card gives both players one of three possible spells, all sharing a name with a song by the ETC band: "I Am Murloc", "Power of the Horde" and "Rogues Do It...". E.T.C.'s flavor text reads: "He's looking for a drummer. The current candidates are: Novice Engineer, Sen'jin Shieldmasta', and Ragnaros the Firelord."

The possibility of quests related to The Tauren Chieftains has been suggested due to comments by the band's manager, Michael Schweitzer, who has alluded to the possibility by saying, "We're not currently hiring for the show or the crew, but you can always check back later. Who knows what will arise?"