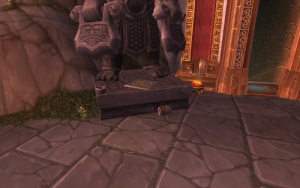 on the base of a statue on the ridge southeast of Mistfall Village outside the entrance of the Silent Sanctuary in the Vale of Eternal Blossoms.

[The Dark Heart of the Mogu].

It has been written that when the great Lei Shen first looked upon the lands of the mantid, he did not feel fear, but inspiration.

As he began to unify his people under a single banner and subjugate the other races of Pandaria, he knew that the mantid would never succumb to his authority. They spoke his language, the language of strength. He commanded his slaves to construct the Serpent's Spine, a magnificent wall that spanned the length of the empire.

It would take many generations to build. But Lei Shen knew how to motivate his subjects. Fear. Fear of the mantid moved mountains, raised armies, secured his empire, and built his wall.