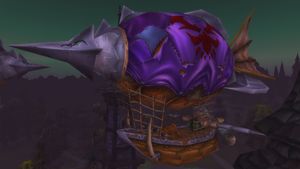 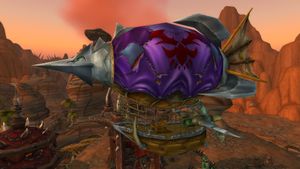 The Thundercaller is a zeppelin with a goblin crew and Forsaken guards and runs between a tower outside Orgrimmar in Durotar and a tower outside of Brill in the Tirisfal Glades.

The crew is constantly making repairs to the craft. According to them, under the command of Sky-Captain Cloudkicker and the control of Navigator Fairweather, the zeppelin has crashed repeatedly in a wide array of zones.

After the Battle for Lordaeron the Thundercaller was removed from service as it caught fire just one too many times. It was replaced by portals to and from Orgrimmar.[1]