The Tomb of Sargeras (WC3 NightElf)

For other usages, see Tomb of Sargeras (disambiguation).

The Tomb of Sargeras is chapter 3 of the Terror of the Tides campaign.

Moments later, just inside the entrance of the shadowed tomb, Maiev and her Watchers brace themselves for an ambush.

Maiev pursued Illidan into the Sargeras's Tomb hoping to stop Illidan before he claimed the terrible demon's powers. Inside, Maiev and her forces battled Illidan's Naga as well as the demonic guardians of the tomb. Maiev was confronted by the Naga sea witch Lady Vashj, who told Maiev of the true nature of the Naga. The Watchers also discovered runes written by Gul'dan himself as he searched for the Eye of Sargeras, as well as his terrible death. Eventually they discovered the central chamber of the tomb, only to find that Illidan had already claimed the Eye. Taunting Maiev, Illidan used the artifact's demonic powers to bring the tomb crashing down around the Watchers, hoping to imprison the Warden in much the same way she had him. Maiev managed to use her magic to escape, however Naisha and her remaining troops were not so lucky, and were buried alive.

The Search for Illidan

Illidan's nefarious plans have led him deep into the Tomb of Sargeras. You must find the Betrayer and discover what he's up to.

With the walls of the tomb beginning to crumble, time is running out. Maiev must use her Blink ability to reach the surface and escape before the crumbling tomb becomes her own.

Your Night Elf brethren have found several passageways that lead into the Tomb of Sargeras. There are only a few rock barriers remaining between Maiev and her warriors. Destroy the rock barriers so she can rendezvous with her troops.

As Gul'dan's wretched body was ripped to pieces by the Tomb's Demonic guardians, his most coveted artifact was shattered. The Shadow Orb, the artifact imbued by the Shadow Council itself, was broken into 10 Fragments. Locate the missing Fragments, and reassemble the Orb. With each remnant found, the Orb's power will increase.

The Shadow Orb of Gul'dan

Illidan entering the Tomb of Sargeras

Using Maiev, you can get the pieces of a legendary artifact known as the Shadow Orb inside the Tomb of Sargeras. Information on where the various pieces of the orb are located can be found at [1]
When you find the first piece -

Maiev Shadowsong: This is a piece of Gul'dan's Shadow Orb. He must have shattered it by accident. If we can find the other missing pieces, we could reassemble the Orb and use its power to aid us.
When you find the last piece -

Maiev Shadowsong: Finally, the last piece of the Shadow Orb! Now we'll use Gul'dan's own artifact to discover what he could not.

The scenario begins with a cinematic of Maiev and Naisha speaking to one another after having initially entered the Tomb of Sargeras with their minimal forces.

Naisha: I have a bad feeling about this, mistress. It's too quiet. It feels as if we're walking into a trap.

Maiev Shadowsong: Still, we must press on, Naisha. If Illidan finds whatever it is he's seeking, he could-- Wait! Look there!
Maiev spots red runes scrawled on the walls of the tomb.

Maiev Shadowsong: Strange... these are orcish runes! They were written by Gul'dan when he first opened this tomb twenty years ago.

Naisha: What do they say?

Maiev Shadowsong: Apparently, he logged his journey through the Tomb's depths. These runes seem to depict that history.
The cinematic shifts to a flashback of Gul'dan entering the tomb with his forces.

Gul'dan: Quickly, you fools--fan out and search for the primary passageway! We must reach the Chamber of the Eye before the tomb's guardians awaken!
A monstrous roar echoes through the tomb. Gul'dan's followers turn and flee but halt after one of them is shot down by the warlock.

Gul'dan: Now, Sargeras, I will claim whatever's left of your power--and bring this wretched world to its knees!

Maiev Shadowsong: There's no telling what Gul'dan and his lackeys awoke in this foul place. We must be cautious.

Maiev Shadowsong: Gul'dan led them blindly to their deaths. Still, they hunger for revenge.

After progressing about a third of the way across the southern portion of the map you'll encounter an Overlord guarding a Demonic Gate.

Overlord: Turn back, you mortals. None may defile the Tomb of Sargeras!

After progressing about half-way across the map you'll encounter the first of three rock barriers.

Maiev Shadowsong: I can hear our comrades' voices from the other side of this barrier! If we destroy it, they'll be able to get inside and help us hunt for Illidan.

In the very center of the map Maiev discovers a second set of glyphs.

Maiev Shadowsong: There--more of Gul'dan's glyphs! Interesting. They continue the warlock's tale.
The scene shows Gul'dan entering the center of the room alone.

Gul'dan: Blasted, feeble-minded weaklings! They're all likely dead by now!

Gul'dan: Still, I must press on. My power should be enough to--
Ominous dark laughter echoes through the chamber.

Gul'dan: That laughter... Is that you, Sargeras? You seek to mock me? We'll see who laughs last, demon, when I claim your burning eye for my own!

Naisha: Again, he referenced this mysterious 'eye'. What could it be?

Maiev Shadowsong: An artifact, no doubt. It must have contained tremendous demonic power to lure Gul'dan as it did.

Shortly after the center room you come across a statue of a night elf.

Maiev Shadowsong: Strange. It's a statue of Azshara, the great queen of old; she led our people to ruin consorting with Sargeras and his Burning Legion. Only... I don't recall her ever having a tail.

Naisha: She looks more like a naga than one of us. Would those foul serpents have any reason to worship our queen?

Maiev Shadowsong: I don't know, Naisha, but her image chills me to the core.

Upon reaching the second rocky barrier.

Maiev Shadowsong: Destroy that barrier so our forces outside can join us!

At the end of a half-submerged passage is a larger room with burning torches, archways, and naga.

Maiev Shadowsong: What would you know of us or our justice, naga witch?

Lady Vashj: Why, my dear, we naga were once night elves!
The scene changes to several night elves assembled before a golden statue of Queen Azshara.

Lady Vashj: We were Azshara's chosen, the Highborne--banished beneath the cruel seas when the Well of Eternity imploded around us!

Lady Vashj: Cursed, transformed... we have waited ten thousand years to retake our rightful place in the world. And now, with Lord Illidan's help, we shall!

Maiev Shadowsong: Not while I draw breath!

Lady Vashj: Your courage is commendable, but it shall avail you nothing.
Vashj slithers away.

Maiev says the same thing at the third rocky barrier as at the second.

In the chamber before a Massive Ruined Gate Maiev finds the last of Gul'dan's runes.

Maiev Shadowsong: Yes, Gul'dan's script seems to grow more desperate. It reads that he was...
The scene changes to Gul'dan, limping slowly towards the closed gate. Blood pours freely from his wounds and he is clearly barely standing.

Gul'dan: If my servants... had not abandoned me, I could have claimed the Eye and--

Gul'dan: Damn you, Sargeras! I won't be beaten like this! I am Gul'dan! I am darkness incarnate! It cannot end... like this.
As the scene ends, Gul'dan is still crawling towards the enormous gate, his last fading strength spent in his lust for power.

Maiev Shadowsong: This is as far as he got. The runes simply trail off. I cannot imagine what horrors Gul'dan faced in his final moments.

After you pass the gate where the last of Gul'dan's runes lie you come to a second Massive Ruined Gate.

Maiev Shadowsong: I hear dark whispering beyond this gate. It could be Illidan and his minions.

You break down the gate. In the chamber beyond, Illidan is standing before a green runed stone, accompanied by Lady Vashj and her mur'gul.

Illidan Stormrage: So, Warden Shadowsong, you've made it at last. I knew you would.

Maiev Shadowsong: You have much to pay for, Illidan. I'm taking you back to your cell.

Illidan Stormrage: Naivete does not suit you. When I consumed the power of Gul'dan's skull, I inherited his memories, especially those of this place... and the dark prize he coveted.

Maiev Shadowsong: Yes, the power of Sargeras. You would claim it as your own!

Illidan Stormrage: That power is beyond my reach, little warden. But this--

Illidan Stormrage: --the Eye of Sargeras--contains all the power I'll need to rid this wretched world of my enemies once and for all. Ironic that you should be its first victim.

Illidan Stormrage: Isolation can do that to the mind. Now, after all the long centuries you kept me chained in darkness, it is only fitting that I bury you in turn.
Illidan channels on the eye, causing the chamber to start collapsing. A pile of rocks falls down behind Maiev and the Watchers, blocking their exit from the chamber.

Maiev Shadowsong: Damn! I must reach Shan'do Stormrage and warn him of his brother's treachery. My power will allow me to escape, but I fear there is no way out for the rest of you.

Naisha: Go, mistress! The goddess will light our path to the hereafter.

Maiev Shadowsong: I will not forget you, my sisters. You will be avenged. I swear it!
Maiev blinks past the barrier, leaving Naisha and the others to their fate.

Maiev Shadowsong: Now, I've got to find a way out before this cursed tomb is drowned by the seas! 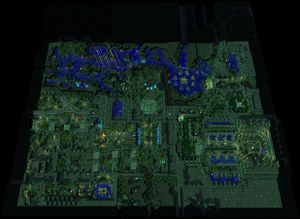