The Trial at the Temple

Accompany the Monkey King to the Temple of the Jade Serpent and obtain Fu Zan, the Wanderer's Companion.

My staff was strong and mighty without peer, but since I not its master, in time it would soon disappear.

The staff was a gift from the Jade Serpent, Yu'lon, but for only a single task. With my work finished, to her again it has passed.

Yu'lon be the staff's keeper, holding it for those who are blessed. To her we now go now, to announce your request.

I knew you'd succeed, <name>. I'm honored to be at your service. 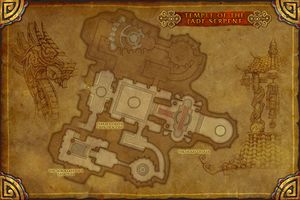 Temple of the Jade Serpent map 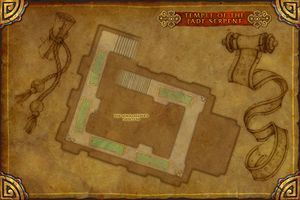 Temple of the Jade Serpent map

Speak to The Monkey King to enter the scenario.

Time to get slerpin' and grookin', King say. Get busy! It best if we start right away.

Let's go to the Temple.

Stage 1: Crisis in the Temple

You've entered the temple grounds. Meet with The Monkey King and prepare to head deeper into the complex.

Kill the demons to rescue the scribes. Use

[Paralysis] as needed for crowd control.

A powerful demon has killed Lorewalker Stonestep! Avenge his death and look for any further survivors.

Lorewalker Stonestep is killed by the observer.
Belphiar yells: Such delicious knowledge!

Belphiar says: Another mind to feed upon!

Stage 4: Down But Not Out

Stage 5: Death From Above

Stage 6: The Battle of the Serpent

Yu'lon, the Jade Serpent, has been injured! Defend her from the demonic attackers!

Yu'lon says: You should not be here, little ones. The Burning Legion's attacks are relentless. Even I have suffered many wounds.
The Monkey King says: Jade Serpent taught me: king do what king must. We not gonna leave you. There's greenies to bust!
Yu'lon says: Prepare yourself, our foes are approaching!

You'll fight several waves of demons here. It is possible to do this as DPS, but you will need to keep using cooldowns such as

[Touch of Karma] for crowd control. Remember to use

[Detox] to cleanse the disease debuff and to heal yourself from time to time.

Once the final wave has been dealt with, Yu'lon will have recovered.

Yu'lon yells: I AM RENEWED! Come, little ones. Let us put an end to this invasion!

The Eredar Lord Korithis is attacking the temple! Stop him!

Lord Korithis yells: Your mortal allies will not help you, little snake! Your doom is at hand!
Yu'lon says: Heroes, your fight is with Korithis. I'll protect you from his winged monstrosity.

Avoid standing in any AoE that's lobbed at you.

Yu'lon says: You have learned well how to fight these creatures, but this will be only one of many battles.
Yu'lon says: This is Fu Zan. Take it. May it shield you in the dark times ahead.

The Monkey King says: Wooo-hoo, wikket, that's the way! Grooked the greenies, saved the day!
The Monkey King says: The weapon's blessin' don't come free. With courage face your destiny!
Yu'lon says: Fu Zan has has chosen a new companion. Great deeds and great trials await you, little one. For now, you should return home to rest and prepare for what is to come.
Yu'lon says: As a token of my gratitude, allow me to see you home.

Speak to Yu'lon to secure a flight.

Are you ready to return to Shen-zin Su?

It would be an honor.