The Trial of Rage

Speak with Odyn to begin the Trial of Rage scenario. Complete the scenario and claim your prize.

I wish to extend to you a prestigious invitation.

Every year I hold a trial for my finest warrior to prove that I command the strongest in this land. I have chosen you to be my champion in this trial.

Should you succeed in completing the trial, I have a prize that will be worthy of your accomplishments awaiting you at the end.

Take what time you need to prepare yourself. Come back and speak with me when you're ready to begin.

You will also receive: 19

I have no doubt that you will be victorious in this trial. I look forward to watching it.

That was truly a grand exposition of warrior skill. I was truly impressed at how you handled Asrea. She will be missed.

But now on to a grander event. The prize which you so rightfully deserve. 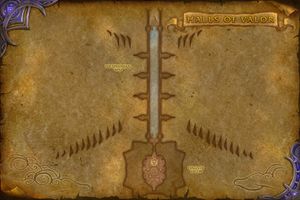 Upon entering, Darius Crowley/Eitrigg get your attention to go to them.

Approaching them will trigger this.

Lord Darius Crowley says: I hope you've come prepared, Battlelord. I've brought supplies with me, should you need them.

Eitrigg says: I hope you're prepared, Battlelord. I've brought supplies with me as well, should you need them.

Odyn says: Welcome, warriors, to the Trial of Rage!
Odyn says: Our first combatants are the mighty Battlelord <name> and the infamous drogbar, Damrul the Stronk!

Damrul is mainly a DPS race due to his Rampage ability that increases his damage by 50% per stack. You also will want to

[Pummel] when he attempts to summon a Drogbar Idol.

Damrul the Stronk says: Wait! Stop, I... I cannot go on. You're clearly the stronger brul here.
Odyn says: An excellent first round! It seems Damrul underestimated the strength of Battlelord <name>.

It was my honor to be welcomed here by Odyn. I will prove his choice in my strength was not misjudged.

When knocked back, avoid the summoned Highmountain tauren. Wait for Steelhoof to then throw his shield before using your cooldowns, as without the shield he takes 50% increased damage instead of enjoying a 50% damage taken reduction. Use a stun and/or slowing ability to increase the length of opportunity.

Omanawkwa Steelhoof says: I yield, Battlelord. You have proven yourself beyond a shadow of a doubt to be the superior warrior.
Odyn says: The vaunted Steelhoof defense has fallen before <name>'s skill! But will that skill be enough to best the next challenger?

I've been to this trial thousands of times. And every time, I've shown Odyn that his warriors aren't worthy to step into the ring with me.

Odyn says: Battlelord <name>'s next opponent is Asrea Moonblade of the proud nightborne of Suramar.
Odyn says: Her blade has felled many a warrior inside this ring. Can the Battlelord find a way to triumph?

Asrea Moonblade will frequently leap to attack you from behind, so be quick to turn around to minimize critical hits taken. She also sometimes leaps to the center of the fighting ring and channels her Whirlstorm ability (which will also generate mini-whirlstorms that rotate outwards).

Asrea Moonblade yells: I WILL NOT YIELD TO THE LIKES OF YOU, PEASANT!
The warrior adventurer slays Asrea Moonblade.
Odyn says: A melee for the ages! Asrea has been so dominant that many spectators considered her unbeatable. It would seem her hubris has ushered in her downfall!

Odyn says: Battlelord <name>, when you are ready to face your final challenger, step onto the rune.

Step onto the "N" rune as shown by the bobbing yellow indicator.

Thyri leaps down from the audience and walks onto the rune opposite the warrior adventurer.
Odyn says: Eyir has sent her finest pupil to serve as Battlelord <name>'s final challenger. I present to you... Aspirant Thyri!
Odyn says: Will Battlelord <name>'s martial prowess be enough to vanquish one favored in the eyes of Eyir?

This fight involves a lot of mobility. Move out of the swirling weapons, step aside from her Path of Eyir charge, and run away when she's channeling Avatar of Eyir.

Aspirant Thyri says: I... I can't believe I lost. Perhaps I am not worthy to ascend...
Odyn says: The Battlelord has bested all challengers! The trial is complete!
Odyn says: Let us revel in our champion's victory! All hail the Battlelord!
Odyn says: When you are ready to depart, Battlelord, this portal will return you to Skyhold.