The Vile Reef is a Horde-only quest in Stranglethorn Vale in which players must dive off the coast near Grom'gol Base Camp to collect a piece of an ancient troll tablet, which the trolls of Orgrimmar wish to have for remembrance.

How to Get This Quest

Other Quests in this Area

The Vile Reef, where this quest takes place, is the location of several quests. It is a good idea to do all of these quests at once. As of patch 2.3, area is no longer elite.

It is possible to do this quest without having to fight the murlocs swimming around the Vile Reef, if you are careful. However, since many players will have

[35] Encrusted Tail Fins, which requires killing the murlocs, they may want to kill them anyway. The

[Tablet Shard] can be looted by right clicking a tablet near a blue glowing area on the ocean floor. The tablet is called Gri'lek the Wanderer.

Coordinates for the tablet Gri'lek the Wanderer are: [24, 22] 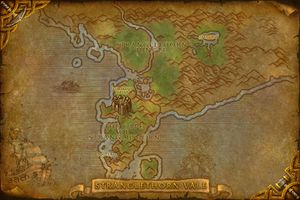 Once you have the

[Tablet Shard], return to Grom'gol Base Camp and talk to Kin'weelay to complete the quest.

Long ago, a great shudder of the earth sunk an old troll city beneath the waters of the Savage Coast to the northwest. We call that place the Vile Reef, for murlocs now reside in the ruins of the city, attacking any who draw close.

There is an old tablet among those ruins that tells the ancient tale of Gri'lek, a hero of troll legends. The tale is sacred to the Darkspear tribe, and although the tablet is too large to move, I want a shard of it to enshrine in our new home in Orgrimmar.

This is good. When I return to Orgrimmar I will place this shard in a sacred place. It will remind us of the might and honor of Gri'lek.

Thank you, <name>. Your deeds mark a growing friendship with the Darkspear tribe.