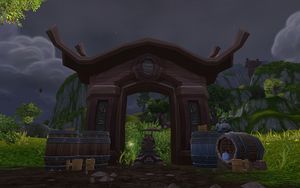 The Wandering Widow is a wood-panel scroll leaning against a shrine, which features a small statue of Liu Lang riding Shen-zin Su found at [34.5, 63.9]

north west of the Meeting Stone for Stormstout Brewery, at Thirsty Alley in southwestern Valley of the Four Winds.

Many generations ago, Liu Lang the explorer returned to Pandaria every five years on the back of a giant sea turtle, collecting more and more explorers with each visit. Locals had taken to naming it "The Wandering Isle," for the turtle had grown so large as to have a small town and temple built upon its back.

One year, local widow Mab Stormstout was grief-stricken over the loss of her husband to a tragic grape-press accident. She declared that Pandaria no longer had anything to offer her. With that, her and her young son Liao Stormstout climbed abord the turtle, among the first brewmasters to do so.

The Wandering Isle has not returned to Pandaria in many generations. It is presumed that the turtle, Shen-zin Su, stopped returning to the mainland shortly after the death of his beloved friend Liu Lang.