For the cavern passage in Shadowmoon Valley, see Waning Crescent. 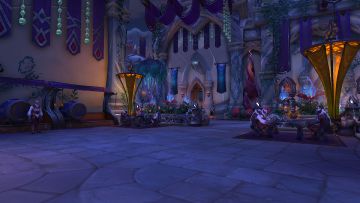 The Waning Crescent is a tavern located in the Starcaller Retreat district of the nightborne Suramar City. Owned by Vanthir, it acts as one of the main meeting points for citizens in the west of the city. The establishment itself contains an enclosed courtyard with several storerooms and other buildings forming a small compound. It can be found just off the main square of Starcaller Retreat.

Additionally, blacksmithing services operated by Dasdonia, food provisioning by Joshen Lafave, and an inn run by Maribeth, were available in the Waning Crescent.

Located in one of the less socially-well-off areas of Suramar City, the Waning Crescent would go on to play a major role in the Nightfallen rebellion, serving as a headquarters and important staging area for the resistance. This association, however, would ultimately lead to its destruction at the hands of Grand Magistrix Elisande later in the conflict.

The Waning Crescent is situated in the lower levels of Suramar City's west, where the majority of the nightborne lower and middle classes reside.

With the onset of the third invasion of the Burning Legion, the demons were allowed access to Suramar by Grand Magistrix Elisande in exchange for an alliance that would spare the lives of the nightborne people. This decision, however, was fiercely opposed by many members of nightborne society, including the First Arcanist, Thalyssra. Thalyssra, after a failed coup attempt, would ultimately form the Nightfallen resistance in opposition to Elisande and her demonic pact, sparking the Nightfallen rebellion.

In gathering allies for the new cause, the Nightfallen would approach individuals in Suramar City with known sympathy for the insurrection. One such individual proved to be Vanthir, the proprietor of the Waning Crescent in Starcaller Retreat. Vanthir was shocked by the harsh policies being inflicted on Suramar's lower classes by Elisande in an attempt to keep them in line, which included the severe rationing of vital arcwine. With the help of the Nightfallen, Vanthir transformed his tavern into a distribution center of arcwine to those who were being starved of it and withering as a result.[1]

Though its main base remained in the ruin of Shal'Aran outside Suramar City, the Waning Crescent soon became the primary headquarters of the rebellion within the city itself, connected to Shal'Aran by a nearby telemancy beacon. From here, the Nightfallen began orchestrating many acts of sabotage and espionage throughout Suramar to strengthen the rebellion. The tavern also acted as a secure meeting spot for high-ranking members of the insurrection, for example serving as something of a campaign headquarters for the double-agent Ly'leth Lunastre in her bid to win election as advisor to the Grand Magistrix.[2] 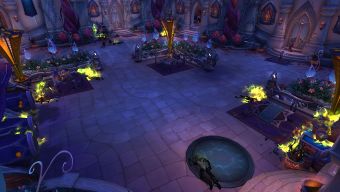 The massacre at the Waning Crescent

The Waning Crescent's prominent role in the ever-growing rebellion eventually drew the full attention of Elisande and her allies. To send a message, the Grand Magistrix ordered a large force of demons and Duskwatch to massacre the population of Starcaller Retreat and the nearby Siren's Vigil. The Nightfallen were caught off-guard by the suddenness and brutality of the attack, and were not able to respond in time. The Waning Crescent, the surrounding district, and many nightborne civilians, were wiped out.[3]

The massacre at the Waning Crescent proved to be one of the most savage acts of the conflict. It did serve to help turn the tide of the civil war, though not in the way Elisande hoped. Instead, the spectacle drove yet more nightborne towards the rebellion; even many of the Grand Magistrix's previously-staunch supporters within the Duskwatch switched sides in horror.[4]

The owner of the Waning Crescent, Vanthir, survived the slaughter and was captured. As a prominent member of the insurrection, he was subsequently taken to the Terrace of Order to be made an example of. Before this could occur, however, First Arcanist Thalyssra scryed his location and ordered a daring rescue attempt which succeeded in raiding the terrace, freeing Vanthir, and spiriting him to safety.[5]

The Nightfallen rebels would also launch numerous attacks on the occupying demon and Duskwatch forces remaining in the district, with the goal of avenging the atrocities committed.[6] Following the events surrounding the Waning Crescent's destruction, the Nightfallen relocated to the nearby Evermoon Terrace in the Evermoon Commons district. From there, the rebels would oversee their final push which eventually succeeded in toppling the Grand Magistrix and liberating Suramar from the Burning Legion.