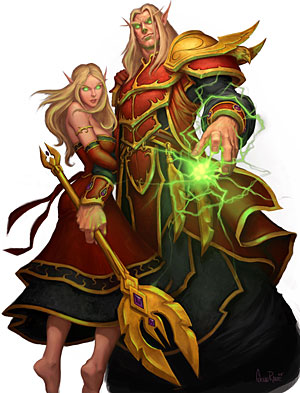 After the Second War, the high elves seceded from the Alliance, and their departure triggered further deterioration in the faltering Alliance. Later, during the Third War, the Alliance extended membership to the night elves, who saw it as their duty to warn their new allies against the high elves. The Highborne's part in bringing about the War of the Ancients figured heavily in the night elves' retelling of elven history. It should come as no surprise that humans came to regard the high elves (and, by association, the blood elves) with resentment and suspicion.

Led by Arthas Menethil, the Scourge recently invaded the kingdom of Quel'Thalas and created the lich Kel'Thuzad, defiling the Sunwell and using the last of its power in the process. Most of the high elf race was slaughtered by the undead. Sylvanas Windrunner's second-in-command, Lor'themar Theron, assumed temporary leadership of the high elves. The few high elves who survived the Scourge's invasion quickly grew ill and apathetic.

Prince Kael'thas Sunstrider was the last of the royal bloodline and a member of the Kirin Tor. He had been pursuing magical studies in Dalaran at the time of the Scourge invasion. When he heard of the disaster, he hastened to Quel'Thalas and found his homeland in ruins. He realized that the elven survivors were all experiencing the same sickness and lethargy, which had begun when the Sunwell's magics were drained. Determined to salvage what he could, Kael'thas rallied all the survivors he could find and renamed them the sin'dorei, or "children of the blood", in honor of those who had fallen to the Scourge.

Thirsting for vengeance despite their weakened state, the healthiest blood elves, including Kael'thas, departed their ravaged land and joined the campaign against the Scourge in Lordaeron. In the prince's absence, Lor'themar was named regent of Quel'Thalas, and Halduron Brightwing became the new ranger-general of Silvermoon. To this day, Lor'themar continues to serve as the leader of Azeroth's blood elves. He and Halduron safeguard the land while they seek a cure for their people's seemingly insatiable hunger.

When Kael'thas and his suffering people volunteered to fight the Scourge alongside Alliance resistance forces, the blood elves were met with suspicion and outright hostility, particularly from the prejudiced human Grand Marshal Garithos. Garithos assigned the blood elves increasingly difficult missions until Kael'thas was forced to accept the assistance of Lady Vashj and her naga. When Garithos discovered that the blood elves were working with the naga, he felt that his distrust had been vindicated. He imprisoned the hapless blood elf soldiers in the dungeons of Dalaran and sentenced them to death.

Fortunately Vashj arrived in time to free the blood elves, who were suffering terribly from their hunger for magic by this time. Vashj explained that the naga, too, were addicted to magic, and she said that Illidan could help the blood elves. She then led them to the portal that Kel'Thuzad had opened during the Third War (so as to give Archimonde entry into Azeroth). With no other palatable choices, Kael'thas and his fighters followed the naga through the portal and into the shattered realm of Outland. There, the elves freed the renegade demon Illidan Stormrage, who had been taken prisoner by Warden Maiev Shadowsong.

After the rescue, Kael'thas beseeched Illidan for a cure to the blood elves' addiction to magic. Illidan had a different proposal in mind, though: in return for the blood elves' loyalty, he would teach them to drain magic from powerful alternative sources, including demons. It was an offer Kael'thas felt he had to accept. He was certain his people would die without either a cure or a new source of magic. Kael'thas pledged his allegiance to Illidan, who taught several blood elves the techniques he had offered. These teachings spread to the other blood elves in Outland, who were then able to stave off their painful hunger for arcane magic.

Heartened by their swift recovery, most of Kael'thas' group chose to stay in Outland and further their studies, but Grand Magister Rommath was sent back to Azeroth, bearing a message of hope for the blood elves still in Quel'Thalas. He relayed tales of a glorious promised land, spread the teachings of Illidan--teachings that Rommath smoothly attributed to Prince Kael'thas--and planted the notion that Kael'thas might one day return to lead his people to paradise.

Rommath remained in Quel'Thalas to help rebuild and await the prince's return. Thanks to Rommath, the blood elves on Azeroth learned how to drain arcane magic and feed their addiction. As they returned to health, they praised their absent prince and dedicated themselves to learning more. Rommath and the new order of elven magi made great progress in tutoring their brethren to manipulate arcane energies. Soon the spires of Silvermoon City rose skyward once again, powered by volatile magics. The blood elves have even begun retaking portions of Eversong Woods. Emboldened by the promise of Kael'thas' return, the prince's weary people now focus on regaining their strength and forging a new path into an uncertain future.

The Consequences of Addiction

Blood elves no longer truly consider themselves high elves, and they tend to have different priorities and behaviors than their high elf kindred. Unlike high elves, blood elves have decided that in the absence of the Sunwell, they will feed their hunger for arcane magic by draining that magic from alternative sources.

However, some basic similarities remain between blood elves and high elves, for both groups belong to the same race. As with high elves, most blood elves are not spellcasters. Blood elves do not drain magic in order to engage in spellcasting, but simply to feed their addiction to arcane magic. Gaining this magic on a reasonably regular basis has not given immortality to the blood elves, who are just as prone to illness, injury, and age as their high elf brethren. To date, there have been no observations of a significant difference between blood elf and high elf lifespans.

On several occasions after the Sunwell's defilement, Kael'thas publicly asserted that his people would die unless they found a new source of magic. There can be no doubt that withdrawal from prolonged exposure to arcane magic is a very unpleasant process: to this day it is not impossible that a high elf might choose to give in to the addiction and become one of the blood elves. Technically, though, the prince was mistaken. According to the top priests and medics on Azeroth, the only high elves who perished due to the Sunwell's loss were the very old, the very young, and elves who were already in poor health.

This is not to say, however, that withdrawal from magic would leave the blood elves unharmed. On the contrary, permanent mental or physical damage is possible.

Even so, the prince's relatively quick acceptance of dire measures (e.g., draining magic from demons) is by no means characteristic of blood elves in general. The blood elves of Outland have by now discovered Kael'thas' agreement with Illidan, and they have for the most part become convinced of its necessity. Most blood elves still live on Azeroth, though. Few of these elves know of Kael'thas' pact with Illidan, and many would be horrified if they discovered it. Draining magic from small mana-bearing vermin is a far cry from draining magic from demons. Yet, as their hunger grows, blood elves--particularly those in Outland--are becoming increasingly inured to the things they must do in order to obtain more magic.

Blood Elves and the Horde

Approximately 85% of the blood elves still dwell on Azeroth rather than Outland. Most of Azeroth's blood elves live in Quel'Thalas. For example, the Farstriders, a small but elite group of blood elf rangers, are fighting to drive the remaining Scourge out of Quel'Thalas.

In general, blood elves have negative impressions about much of the Horde. The blood elves' animosity toward trolls, for instance, has been well documented since the founding of Quel'Thalas, and that animosity was cemented by the Troll Wars. Nor do the blood elves have a fondness for orcs, who wrought widespread destruction and burned the borderlands of Quel'Thalas during the Second War. The elves have no particular quarrel with the tauren, but tend to think of them as bestial brutes.

Yet the blood elves remaining on Azeroth are developing a relationship with the Forsaken due to Queen Sylvanas Windrunner, who was ranger-general of Silvermoon until Arthas converted her into undeath against her will. The queen claims that she still considers herself one of the foremost protectors of Quel'Thalas. She has repeatedly offered assistance in the form of supplies and troops.

Thus far, the blood elves seem to fear a trick, or perhaps they are simply having difficulty overcoming their dislike for the rest of the Horde. Whatever the case, blood elves have declined most of Sylvanas' offers, particularly those that would involve stationing Forsaken soldiers in blood elf lands. Yet the beleaguered elves are well aware that they are massively outnumbered by the Scourge, and no one else seems willing to fight for what remains of Quel'Thalas.

Certainly the Alliance has shown no interest in helping the Azerothian blood elves either reach Outland or drive the Scourge out of Quel'Thalas. Already suspicious of the few scattered high elves who still exist, the Alliance considers the blood elves even less trustworthy. Night elves are particularly hostile toward blood elves: to night elves, the sin'dorei stink of desperation and arcane magic.

Given the blood elves' precarious position on Azeroth, it seems increasingly likely that they will form an alliance of convenience with the Horde.