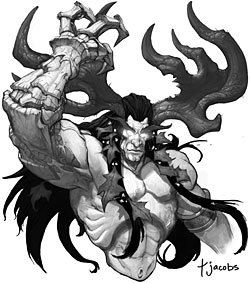 As the son of Elune, goddess of the moon, and the demigod Malorne, Cenarius inherited a deep connection to the world of Azeroth and its creatures. The tauren have a myth that purportedly relates the story of Cenarius' conception.

When Cenarius' birth sent a ripple through the Emerald Dream, Ysera took an immediate interest in him. Guiding him into the Dream, she taught him much of its secrets and became a foster mother of sorts to him. In fact, the affectionate understanding that she and Cenarius shared has led many of Azeroth's elder races to mistake the pair for mother and son.

Cenarius grew to love the lush forests of Ysera's verdant realm. He could often be found treading its infinite dreamways, either watching over Azeroth and its creatures, or simply hoping for all that they might yet become.

When the night elves first developed around the Well of Eternity, their curiosity led them to meet and befriend a number of powerful entities, including Cenarius. The demigod became fond of the night elves, and he spent a great deal of time teaching them about the natural world. Under his guidance, the night elves developed a strong empathy for the living forests of ancient Kalimdor and reveled in the harmonious balance of nature.

Over time, however, the night elves were increasingly drawn to the cosmic energies of the Well. Furthermore, the rapid growth of the night elf civilization led inevitably to the creation of new buildings and roads. Large tracts of forest vanished. Tranquil woodlands turned into sprawling cities, and great trees were warped and twisted into shapes that would better serve as night elf dwellings. The night elves were losing touch with nature.

The number of night elves pursuing their studies with the demigod dwindled, and Cenarius was grieved to realize that all his work had been for naught. Reluctantly he departed night elf lands. He resolved that he would respect their choice, however much he disagreed with it. From that point forward, Cenarius retreated into the wilds of the world and avoided most sentient races until they came to doubt his very existence.

Millennia before the night elves' interest in arcane magic led to the Great Sundering, Malfurion Stormrage came across several legends that referenced the mysterious Cenarius. Malfurion had always had great reverence for the natural world, although the night elves as a race had long since abandoned any interest in such matters. He shared these legends with his twin, Illidan Stormrage, and their mutual friend, Tyrande Whisperwind. The three night elves decided that it would be an exciting adventure to search for Cenarius, though in truth they no more believed in the demigod than the rest of their people did.

It wasn't long before scattered plants and animals of Azeroth brought tidings of these three night elves to Cenarius. Surprised and intrigued, Cenarius located the night elves and looked into their hearts. He saw great promise in Malfurion, a promise that made up Cenarius' mind.

The laughing trio was shocked into silence when Cenarius stepped out of a shadowed thicket. He introduced himself and offered to teach them the druidic arts. They accepted eagerly. Malfurion proved a quick and talented student, but his brother was clumsy and quickly grew impatient. For her part, Tyrande was already a novice in the Sisterhood of Elune and so had dedicated herself to the goddess above all others. Cenarius knew that Malfurion alone would go on to become a druid.

Invasion of the Burning Legion

Malfurion made significant progress in his studies before he was assailed by a disturbing vision. He watched helplessly as the Highborne inside the palace abused the Well of Eternity's magics. The vision gave him the strong conviction that Queen Azshara and her high-ranking spellcasters would cause a catastrophe unless someone intervened. Malfurion brought his concerns to Cenarius, who was greatly worried.

Even so, the night elves realized what was happening too late. Demons poured out of the royal palace and began to slaughter everything in their path. The War of the Ancients had begun.

As the crisis unfolded, Cenarius taught Malfurion all he could and then sought out the other demigods of Azeroth. They were unaccustomed to the idea of working together; as a result, it took no little persuasion from Cenarius before they finally agreed on a course of action. They rode to the battlefront and found that the war was well underway.

Quickly Cenarius assessed the situation and then led the other demigods to the leader of the night elf army, Captain Jarod Shadowsong. The astonished captain readily accepted the demigods' offer of assistance, and the tide of battle seemed to shift.

Reacting to the new and powerful threat, the vast demonic army refocused its attacks on the demigods, who were soon overwhelmed. Cenarius was badly wounded and completely surrounded by the time Malorne charged up and drove back his son's attackers with a few sweeps of his massive antlers.

The night elves scrambled into action, pulling the unconscious Cenarius to safety. Malorne easily held the demons off for a time. Then Archimonde came forth and engaged the giant stag in single combat, ultimately snapping Malorne's neck. Malfurion was furious and grieved; he called roots out of the ground to attack the demon lord. As the plants tightened their stranglehold on the demon's massive form, Archimonde was forced to teleport away in order to escape.

Ysera was sad to learn of Malorne's death, and her dragonflight carefully helped Cenarius enter the Emerald Dream, where the green dragons ministered to his injuries. Despite his sorrow and the lingering effects of his wounds, Cenarius emerged from the Dream not long after the Great Sundering, for he could feel the land cry out for healing.

To his horror, he discovered that Illidan Stormrage had created a second Well of Eternity. Jarod Shadowsong left Illidan's punishment to Malfurion, who felt it would be the height of folly to leave Illidan free to continue his reckless pursuit of power. Thus, with Cenarius' help, Malfurion sealed Illidan within a vast underground barrow prison, there to remain chained and powerless until the end of time.

Seclusion of the Night Elves

Tyrande Whisperwind, now high priestess of Elune, implemented sweeping changes throughout night elf society. She organized a new all-female army, the Sentinels, and decreed that it would be directed by the Sisterhood of Elune. Nobility and sorcery were now considered the relics of a decadent and shameful past.

Nevertheless, a group of Highborne under Dath'Remar Sunstrider refused to give up practicing arcane magic. After discussing the matter at length, Tyrande and Malfurion made the difficult decision to exile their defiant kin. In the wake of the group's departure, the remaining night elves deliberately withdrew from the rest of the world. A veil of mist descended upon their entire continent, shrouding its presence from passing sailors.

Meanwhile, Cenarius remained nearby in the Moonglade of Mount Hyjal. His male offspring, the keepers of the grove, kept close watch on the night elves and regularly helped the Sentinels maintain peace in the land. Even Cenarius' shy female descendants, the dryads, appeared in the open with increasing frequency.

Time passed, and a new race arrived on Azeroth: the orcs, who originated on the planet Draenor. Under the influence of demons, the orcs had changed from a peaceful shamanic society into the bloodthirsty Horde. They waged war upon the humans of the Eastern Kingdoms and killed countless other creatures during the First and Second Wars. Cenarius and the night elves did not emerge from their seclusion to intervene, for they knew nothing of any events that occurred outside Kalimdor.

The Second War ended badly for the orcs, and the Horde was shattered. Just before the Third War, a new orc warchief emerged: Thrall, who reformed the Horde and led his people across the sea to establish their own homeland on Kalimdor. This new Horde had no desire for further warfare. The orcs simply wanted to leave the human lands behind and find a place to call their own.

The orcs did not receive a warm welcome on Kalimdor. The night elves dispatched a number of scouts posthaste, and the scouts returned with frightening stories of the orcs' past atrocities during the First and Second Wars. In the meantime, the orcs chopped down a great many trees in Kalimdor, clearly intending to establish a settlement. Cenarius became certain that the orcs had returned to their warlike ways. He led a group of night elves and treants against a large group of the orcish intruders.

The newborn Horde would surely have been crushed, save for the fact that several agents of the Burning Legion had recently arrived on Azeroth. The Legion had not forgotten the valor and might that Cenarius displayed during the War of the Ancients, and they were determined to see him defeated. At the dreadlord Tichondrius' suggestion, the pit lord Mannoroth spilled his blood into a pool of water, and the resulting corruption was soon detected by the Horde's troll witch doctors.

Led by Grom Hellscream, the orcs drank of the pool's tainted waters and reveled in the return of their demon-granted power. Overcome with supernatural hate and rage, Grom and his warriors retaliated against Cenarius and his allies. Ultimately the orcs succeeded in killing the demigod. The night elves and many other creatures, including Ysera, mourn Cenarius' tragic death to this day.

The information could still retrieved from http://www.wow-europe.com/en/info/encyclopedia/350.xml.