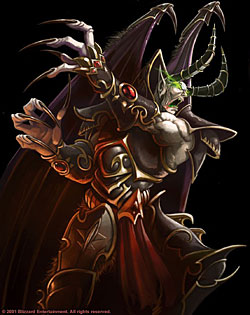 Demons are evil immortals who feed upon magic and life. They delight in inflicting suffering, spreading corruption, and, of course, destroying all that is good. Most demons were once mortal. Not all demons are sentient: various animals have been transformed into demons, for instance.

In order to become a demon, a creature must be infused with fel energy. As the existence of non-sentient demons suggests, a creature's wishes are irrelevant to the process. Willing or not, a creature can be changed into a demon. Such a transformation alters the affected creature on a fundamental level and typically leaves little or nothing of that creature's original personality. Still, at least one demon has thus far maintained much of his original personality: Illidan Stormrage.

No discussion of demons can be complete without mentioning Sargeras, the dark titan. Over the course of millennia, he twisted many creatures into demons so that they would join his Burning Legion and work toward his goal: the destruction of the universe, which he believed to be fundamentally flawed. Fulfilling his grim design, the Legion has ravaged innumerable worlds. However, Sargeras was not the sole creator of demons, and there are demons that have no affiliation with the Legion. Again, Illidan is an example of both of these exceptions.

There have been no reported sightings of Sargeras since the death of the wizard Medivh, who was possessed by Sargeras' spirit at the time. Even so, a demon's hunger for life and magic can never be sated for long. More to the point, a demon's innate cruelty makes a moot point of whatever temporary satiation a demon can know. As a result, destruction tends to follow demons, whether or not they are part of the Legion.