Druids come and go as they please, and their goals typically have little to do with the "civilized" world. Unaffiliated with any specific government, the primary druidic organization on Azeroth, the Cenarion Circle, answers to no one save itself. The highest rank that a druid can have is that of archdruid, and there are only a few archdruids on Azeroth. At the moment the Cenarion Circle's leader is Archdruid Fandral Staghelm. However, the first mortal druid on Azeroth was Archdruid Malfurion Stormrage. 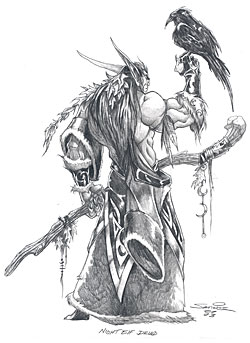 Through their deep connection to life and nature, druids are able to take on an unusually large variety of roles. Probably a druid's best-known role is that of a healer. Druids are justly famed for their ability to restore life, cure poisonous wounds, and remove curses. Indeed, restoring and protecting the planet is one of the top priorities for all druids. Still, to regard a druid as merely a healer is a dangerously simplistic assumption that has led to the defeat of many an unwary foe.

A druid's empathy with the creatures of the wild also allows him to shapeshift into the forms of other animals. For example, a wounded druid whose magical energies are running low might abruptly take on the form of a bear in order to better withstand further injury. Alternatively, the druid might shift into the form of some large cat, sneak up behind an enemy, then pounce and deliver a fierce flurry of melee attacks. Even the deepest oceans can be explored by a druid, who can simply shift into an aquatic creature, allowing him to stay underwater as long as needed.

Until the end of the Third War, druids periodically visited the Emerald Dream to monitor the ebb and flow of life on Azeroth. Today such a visit has become more difficult due to Nordrassil's poor health. Druids possess a deep understanding of the way in which all living things depend upon one another. Whenever this delicate equilibrium is disrupted, the druid works to restore the balance. To that end, a druid can use his connection with the Emerald Dream to exert a calming influence over animals, even forcing some into a temporary state of hibernation. Just as the druid can wield peace and somnolence, however, the druid can tap into the fury of nature itself. Terrible storms have responded to a druid's call. Thorns have sprouted from the druid's skin to wound his attackers. Even previously harmless roots have grown up out of the soil at greatly accelerated speeds in order to entangle a foe.

For obvious reasons, druids thrive in the wild outdoors. Inevitably, however, they lose some of their effectiveness when they are forced to endure separation from the natural environment. What good is a cleansing rain when a druid cannot even see the sky? How are roots to capture a foe who is standing atop a high tower? Such cases clearly require a druid with the imagination to consider new strategies and the flexibility to carry them out.

Yet this flexibility, too, comes with an underlying negative corollary. The druid tends to be a jack-of-all-trades, but a master of none. An unusual mixture of priest, rogue, and warrior, the druid is therefore not equal to any of these three classes in their particular specialties. Even so, the druids' incredible adaptability serves them well in confronting the challenges that Azeroth has to offer.

The information could still retrieved from http://www.wow-europe.com/en/info/encyclopedia/785.xml.