The Highborne were the highest caste of night elf nobility long before the War of the Ancients. 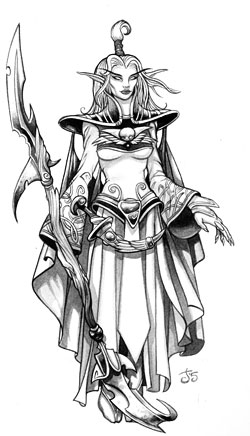 Although to this day there are surviving Highborne, they are not treated as nobility by modern night elf society, and in practical terms the caste ceased to exist over ten millennia ago. Most of the Highborne either perished during the War of the Ancients or became satyrs, naga, high elves, or blood elves.

At first this caste had no special name and was merely comprised of night elves who had unusual intelligence, strength, skills, or wealth. As time passed, however, the gap between this caste and other night elves widened, particularly as these privileged night elves began using their rank to control who would be permitted access to the Well of Eternity.

Families that belonged to the highest caste were soon arranging marriages so as to maximize the magical ability of their offspring. This selective breeding, combined with frequent access to the Well of Eternity, resulted in night elves with progressively stronger magical abilities and greater understanding of how to use those skills. By the time Queen Azshara ascended to the throne, the highest caste of night elf society had come to look and act in a manner distinctively different from lower-caste night elves.

Their vast arrogance, unashamed wealth, garish and multicolored clothing, and decadent habits did not endear them to other night elves. In fact, these powerful families became convinced that they were superior to the rest of their race, and so they began to call themselves the Highborne. As a member of the same caste, the queen approved of the term and made it official.

During the War of the Ancients, a number of Highborne were corrupted by the Burning Legion and changed into satyrs. When the war ended, Kalimdor was shattered by the Great Sundering, and a new ocean was born. Azshara and other Highborne were pulled beneath the waters, and many were changed into naga.

A number of Highborne fled the royal palace before the Sundering and rejoined the main force of night elf defenders, fleeing the disaster with them and winding up on Mount Hyjal. Although these Highborne had realized their folly in having aided the Legion, they still did not agree with the majority of night elf society, which had decided that arcane magic was too dangerous to use. These Highborne were eventually exiled for refusing to give up their arcane sorcery. Renouncing their former people, the exiles eventually founded the kingdom of Quel'Thalas and renamed themselves high elves. Today there are very few high elves left on Azeroth, for most of the high elves who survived the Scourge's invasion of Quel'Thalas have since declared themselves to be blood elves.

Not all the Highborne lived in Zin-Azshari, despite their obsession with the Well of Eternity. For a variety of political or personal reasons, certain members of the nobility opted to live outside the capital city. Moreover, not all night elves (or other races of Kalimdor) joined the main force of night elf defenders. Such holdouts were not necessarily resistant to the idea of joining their compatriots. Indeed, it seems likelier that these small pockets of resistance had heard nothing of the primary defending force and were unaware of the demonic invasion's massive scope.

The Shen'dralar were one of these holdout groups. These Highborne defended their city, Eldre'Thalas, as best they could during the war. After the Sundering, the Shen'dralar remained in the shattered city, which has since become known as Dire Maul. In the ensuing years, these Highborne continued to be isolated from the rest of night elf society, and so their subsequent dangerous actions went unnoticed by their distant kindred. They were never exiled from Kalimdor, nor have any Shen'dralar become high elves or blood elves.